"Beauty and the Billionaire" By: Jessica Clare Review 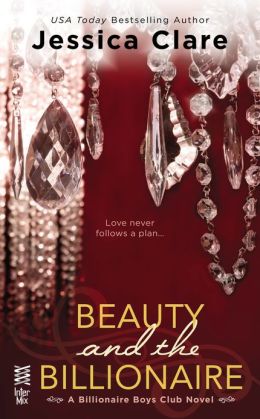 Beauty and the Billionaire
By: Jessica Clare

Real-estate tycoon Hunter Buchanan has a dark past that’s left him scarred and living as a recluse on his family’s palatial estate. Hunter is ready to give up on love—until he spots an enigmatic red-haired beauty and comes up with an elaborate scheme to meet her.

Gretchen Petty is in need of a paycheck—and a change. So when a job opportunity in an upstate New York mansion pops up she accepts. And while she can overlook the oddities of her new job, she can’t ignore her new boss’s delectable body—or his barely leashed temper.

Hunter’s afraid his plan might be unraveling before it’s truly begun, but Gretchen is about to show him that life can be full of surprises…

Having really enjoyed Stranded with a Billionaire, and loving the character of the severely scarred Hunter, I simply devoured Beauty and the Billionaire the day it was released. When you wake up at 2am and realize its finally on your Nook, you’ve gotta read it don’t you?
Taking off really right as Stranded with a Billionaire ends, Hunter Buchanan is entranced by Gretchen. In a scene from the first novel, Hunter overhears Gretchen tell her friend that looks aren’t important in a man. Instantly intrigued, Hunter arranges for Gretchen, an author and a loner, to create a novel based around letters he has purchased.
The story as the title suggests has a very Beauty and the Beast feel to it. Hunter has been horribly scarred when he was younger and now lives as a recluse. Needing and wanting companionship, he invites Gretchen to his house and is utterly and adorably awkward with her. Uncomfortable around her and even having trouble conversing, Hunter (while rich and successful in the business world) finds himself lost in a normal relationship.
Gretchen meanwhile has her own issues to deal with. A stunted writing career, crazy sisters, and an empty checkbook creates a whirlwind of problems that she has little chance of escaping from unless some major things change. When the recluse in the mansion expects her to write a book about some letters he has, she finds it weird but goes along with the program. Trying to draw Hunter out of his shell and not allow him to live up to the beast persona proves to be almost more than she can deal with.
Beauty and the Billionaire is entrancing and as I said before, I woke up in the middle of the night to read it in its entirety. I stayed up for three hours reading frantically because I couldn’t put it down and when I saw the clock read 5am, I decided I might as well stay up and finish. Wonderful characters, hot sex scenes, and a complex relationship round out Clare’s newest release. Can’t wait for The Wrong Billionaire’s Bed, coming in October 2013!