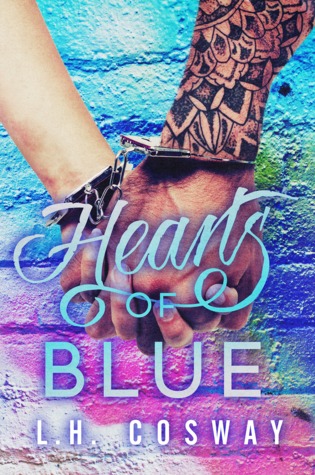 Hearts of Blue
By: L.H. Cosway

She upholds the law. He breaks it.
Two blue hearts, both alike in braveryIn not-so-fair London, where we lay our sceneFrom gun crime to petty theftWhere family is blood and survival makes hands uncleanIn this place, we find two hearts who should be foesAnd yet, amidst the turmoil their love still growsMisadventure abounds and the divide will bring them strifeBut with luck, death doesn’t always mean an end to life.

My Thoughts
LH Cosway has a true gift. This romantic tale of cops and robbers takes you to places you’ve never gone nor do you ever want to leave. Once again thrust into her world of romance, intrigue, and a bit of the unusual, Cosway’s fans will be delighted while new readers will want to read more.
Reader’s of the series will recognize Karla and Lee from previous books. Karla is currently working as a police constable but she finds herself unable to deny the attraction she feels for probable thief and notorious badboy Lee Cross. Lee knows nothing can happen between himself and the police woman, but he is drawn to her again and again. When the choice is given to Lee; he is forced to choose between love or family.
First and foremost, Cosway writes relationship stories. All of the characters in her books may not be blood related, but they have strong friendships that are often tested and loyalty is always given. I think that’s probably the #1 reason I am so drawn to Cosway’s work (beyond the extremely well done naughty parts!), this idea of family is what you make, not what you are born with.
I adored this sweet and erotic romance of opposites attracting. The whole “will they, won’t they” totally worked and I cheered louder than anyone for that first kiss. Lee and Karla have to come to terms with who they are, what they want in life, and decide if they can actually work together. Creative, unique, and romantic, Hearts of Blue is your not-so-classic love story and is once again pure perfection from one of my favorite authors.

Happy Release Day to L.H. Conway and her new book HEARTS OF BLUE. Take a sneak peek into the book below and make sure to enter the giveaway. As a special treat, the author is having a poll on her FB page asking readers to pick a scene from the book that they would like to read from the hero's POV. Stop by her page to vote and the scene that gets the most votes by the end of the Release Week Event will be posted on the author's blog at a later date. Vote HERE!

She upholds the law. He breaks it.
Two blue hearts, both alike in bravery
In not-so-fair London, where we lay our scene
From gun crime to petty theft
Where family is blood and survival makes hands unclean
In this place, we find two hearts who should be foes
And yet, amidst the turmoil their love still grows
Misadventure abounds and the divide will bring them strife
But with luck, death doesn’t always mean an end to life.
Hearts of Blue is a standalone contemporary romance that tells the story of star-crossed lovers Karla Sheehan and Lee Cross, a police constable and the thief who steals her heart.

Lee didn’t answer, and instead he took a step forward, forcing me to back up if I didn’t want us to collide. The problem with this meant my back hit the wall a moment later.

“You’re so pretty, Snap,” he said, voice low, as he dropped his face to my hair and breathed in.

I wasn’t wearing a hat, and my hair was tied up in a bun. My entire body trembled when he wrapped his arms around my waist, inhaled deeply and pulled me into a hug. This was a distraction, I knew it, and yet, I let him distract me. I wanted to be distracted, and I was just glad that the blinds in his office had been pulled.

Standing in his embrace for at least a minute with silence all around us, I was unable to move. I liked having Lee close, loved the feel of him and how he could make feel so…surrounded. Despite all the warning signs, my attraction to him only grew stronger. There was just something about him that called to me.

His mouth moved against my hair. “What is it, Karla?”

“Why are you hugging me?”

“You looked like you needed to be held.” His response was low, and the affectionate undertone had me swallowing deeply. At long last I summoned the willpower to break the hug. His arms fell away from me easily, my stomach churning with confusion. What the hell was I doing?

I stared at the floor when I spoke. “I have to go.”

Heading for the door, I paused when he said gently, “Hey, I needed it, too.”

L.H. Cosway has a BA in English Literature and Greek and Roman Civilisation, and an MA in Postcolonial Literature. She lives in Dublin city. Her inspiration to write comes from music. Her favourite things in life include writing stories, vintage clothing, dark cabaret music, food, musical comedy, and of course, books.
Facebook | Twitter | Website | Goodreads