"The Trouble with Being a Duke" By: Sophie Barnes Blog Tour 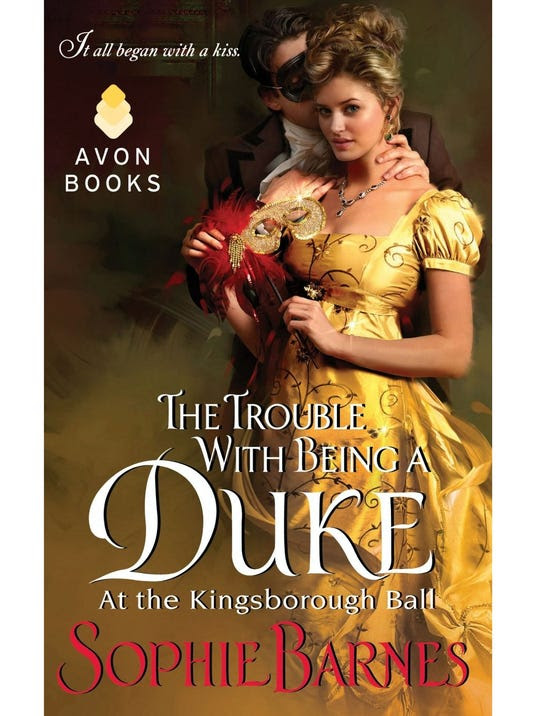 The Trouble with Being a Duke
By: Sophie Barnes
Synopsis


Sometimes happily ever after . . .

Anthony Hurst, Duke of Kingsborough, knows the time has come for him to produce an heir. But first he must find a bride. When he meets the most exquisite woman at his masquerade ball, he thinks his search is over . . . until the breathtaking beauty runs off. With few clues other than her figure, her scent, and the memory of her kiss, Anthony must find his mystery lady.

Isabella Chilcott can scarcely believe it: she is finally at the Kingsborough Ball. As a child, she dreamed of dancing a waltz here, and now, thanks to a gorgeous gown she’s found in the attic, Isabella is living her fairytale fantasy. And she’s waltzing with the Duke of Kingsborough himself! But she must escape before he discovers her secrets . . . for she is not who she pretends to be, and falling in love with Prince Charming is the last thing she can allow herself to do...


Get to Know the Newest Addition to the Avon Family:
Five Questions for Sophie Barnes

Romance authors seem to have an unending love-affair with fairytales. Why do you think that is—and what drew you to this much-loved fairytale?

When it comes to romance, we all long for the hero and heroine to live happily ever after. The greater the obstacles in their way, the greater our tendency to cheer them on, and let’s face it, Cinderella did not have it easy. I think I was drawn to this particular fairy-tale partly because it’s one of my all-time favorites, but also because it centers on something we can all relate to – the wish for a once in a lifetime opportunity to make our dreams come true. Compared to other fairy-tales, it’s probably also the one that’s easiest to adapt to everyday life. We can remove the fairy godmother and her magic wand without compromising the heart of the story. What we’re left with, is a young woman trapped in a difficult situation. When she’s offered the chance of a happily ever after, we want her to succeed, perhaps because inside every one of us there’s a little bit of Cinderella – that wish…what if?

The Kingsborough Ball turns out to be a lively affair, to say the least: gunshots, fireworks, scandals and stolen kisses abound! Where did you come up with the idea to create a whole series revolving around one, glorious evening?

To be honest, it all began with an idea for a short novella with Cinderella as the underlying theme. After submitting my proposal, my lovely editor called, offering me a three book deal instead. I felt like I’d won the lottery, so in a way that was definitely a “Cinderella moment” for me. I no longer had a novella to write, but three full-length novels. While they would all have the Kingsborough Ball as a back drop, I wanted each story to be capable of standing alone without the reader feeling as if they were re-reading the previous story from a different character’s perspective. To achieve this, I gave all the heroes and heroines one event they would all have in common – the Kingsborough Ball shooting. Outside of that, they all have their own separate stories to live, each with their own obstacles and villains.

You’ve had something of a fairytale romance yourself—getting married to the same man three different times in three different dresses is sigh-inducing and swoon-worthy. Do you draw on your own experiences in love and marriage when you write?

Absolutely. It says on my website that my heroes are based on my husband, and that’s definitely true. He has helped me so much by offering me an insight into how a man would react or what he might say in a given situation, and in fact, many of the dialogues between my heroes and heroines are based on conversations that he and I have had. Additionally, we know how wonderful it is to be together and how difficult it is to be apart. When I write, I draw on these emotions. In fact, I believe that being married and knowing what it’s like to care about someone else so deeply, to constantly worry about their welfare, makes me a better writer.

You’re the first historical romance author to migrate from Avon Impulse’s digital-first to Avon’s printed line. What was your publishing journey like?

It truly has been a whirlwind experience - I’ve achieved a lot in a very short time, but I’ve also worked extremely hard at it. Four years ago, I wrote to one of my all-time favorite authors in regards to one of her books. In my email, I mentioned that I was living in Ghana and that I was working on a manuscript (How Miss Rutherford Got Her Groove Back). She responded with something along the lines of, “how interesting – one of the editors at Avon (aka, the fabulous Esi Sogah) is from Ghana.” A year passed and I moved back to the US, upon which I wrote to this wonderful author again, inquiring if there was any chance at all that she might be able to put me in touch with Esi directly. Naturally, I expected a categorical “no”, but as I’ve since come to discover, everyone in the romance book industry is so sweet and helpful. Esi wrote to me shortly after asking to see my manuscript, and in August 2011 I received my first offer.

What’s next for Sophie Barnes and The Kingsborough Ball?

I’m currently working on the third book in the series which will be a friends to lovers story in which the assassin at the ball is revealed. This one will have a few twists and turns as our heroine finds herself in mortal danger and the hero sets out to rescue her. I think readers will be surprised by the villain’s identity – at least I hope they will, because it’s going to be someone completely unexpected. Once that wraps up I’ve a whole bunch of story ideas to work on. I’ll have to decide which one of them to pick for my next proposal.

Isabella’s father had worked in his employ for the past five years, test-driving each vehicle before it was delivered to the client, and while Isabella wasn’t entirely sure of what her father might have told Mr. Roberts about her, the man had one day appeared for tea, and had continued to do so since.
With a sigh, Isabella gathered up her things, feeling not the least bit enthusiastic about Mr. Roberts’s impending visit. Not because she didn’t like him (it was difficult to form an opinion due to his reserve), and certainly not because he had done anything to offend or upset her. On the contrary, he was always the perfect gentleman, adhering to etiquette in the most stringent manner possible.
No, the problem was far simpler than that—she just did not love him, and what was worse, she had long since come to realize that she never would.

There are 3 prizes for this blog tour, and all commenters on ANY of the stops are eligible. 2 runner ups will get a signed copy of LADY ALEXANDRA’S EXCELLENT ADVENTURE, and one lucky winner will get 1 “gold” filigree masquerade mask, 1 golden silk scarf, 1 crystal beaded necklace, 1 Victorian style soap-box and soap, 1 signed copy of TROUBLE WITH BEING THE DUKE, 3 book marks, 3 magnets, 1 tote bag, and a digital book bundle including: HOW MISS RUTHERFORD GOT HER GROOVE BACK, LADY ALEXANDRA’S EXCELLENT ADVENTURE, & FIVE GOLDEN RINGS.

a Rafflecopter giveaway
Posted by The Brunette Librarian at 11:13 PM