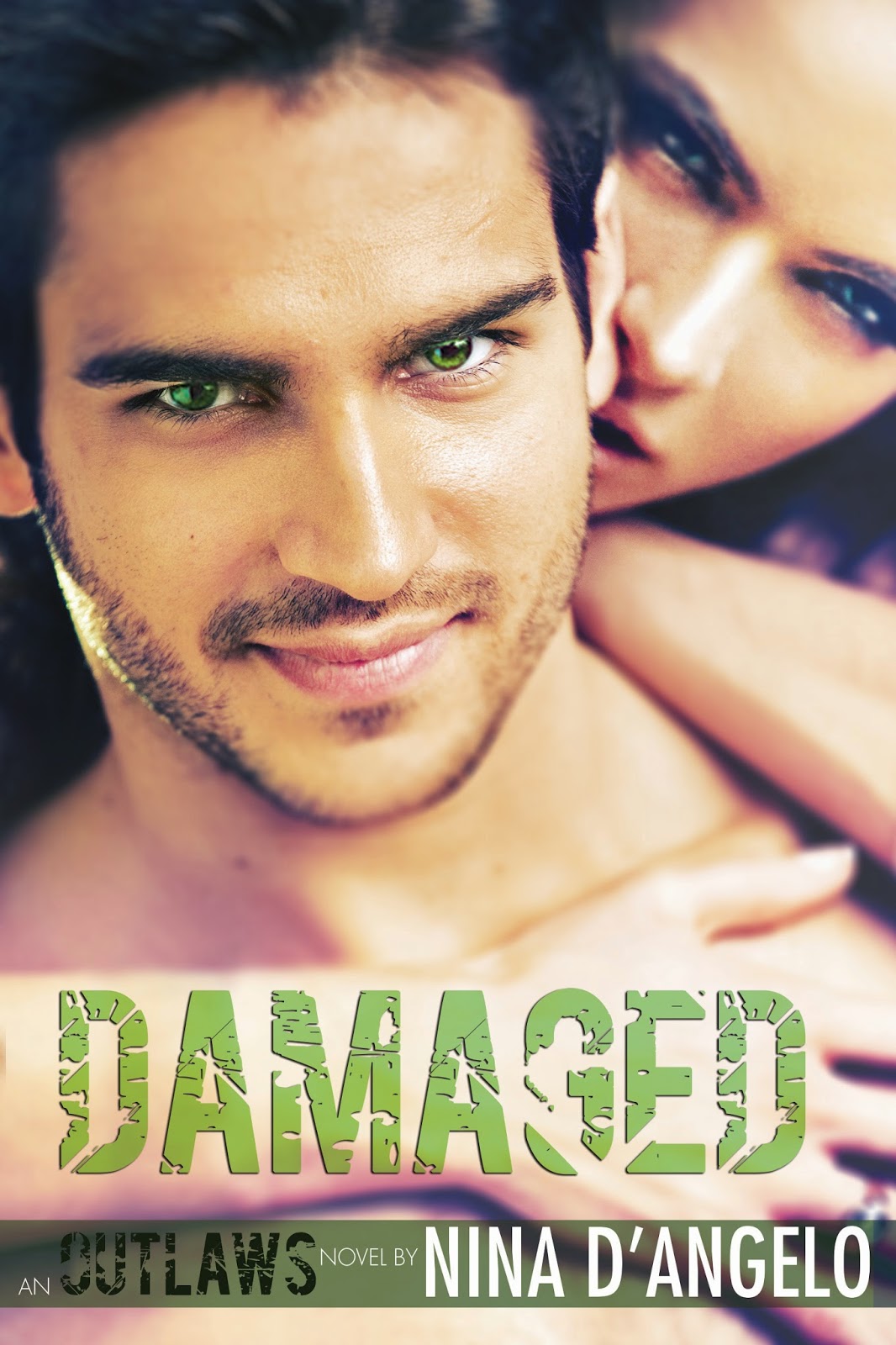 Dominic Delaney works hard and plays just as hard. He’s a love ‘em and leave ‘em guy who doesn’t believe in forever until Stephanie walks into Outlaws. She is wild, unpredictable and dangerous as hell, yet, he’s drawn to her.
He needs to know the secrets behind her eyes. He can’t walk away.
A sexy, tattooed womanizer, Dominic Delaney’s everything Stephanie wants to avoid. She knows she should stay the hell away from him, but he makes her want to stop running.

Sometimes, even the Damaged deserve to fall in love. 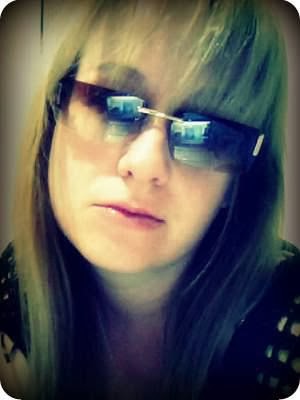 
They are both available in Paperback and ebook format. 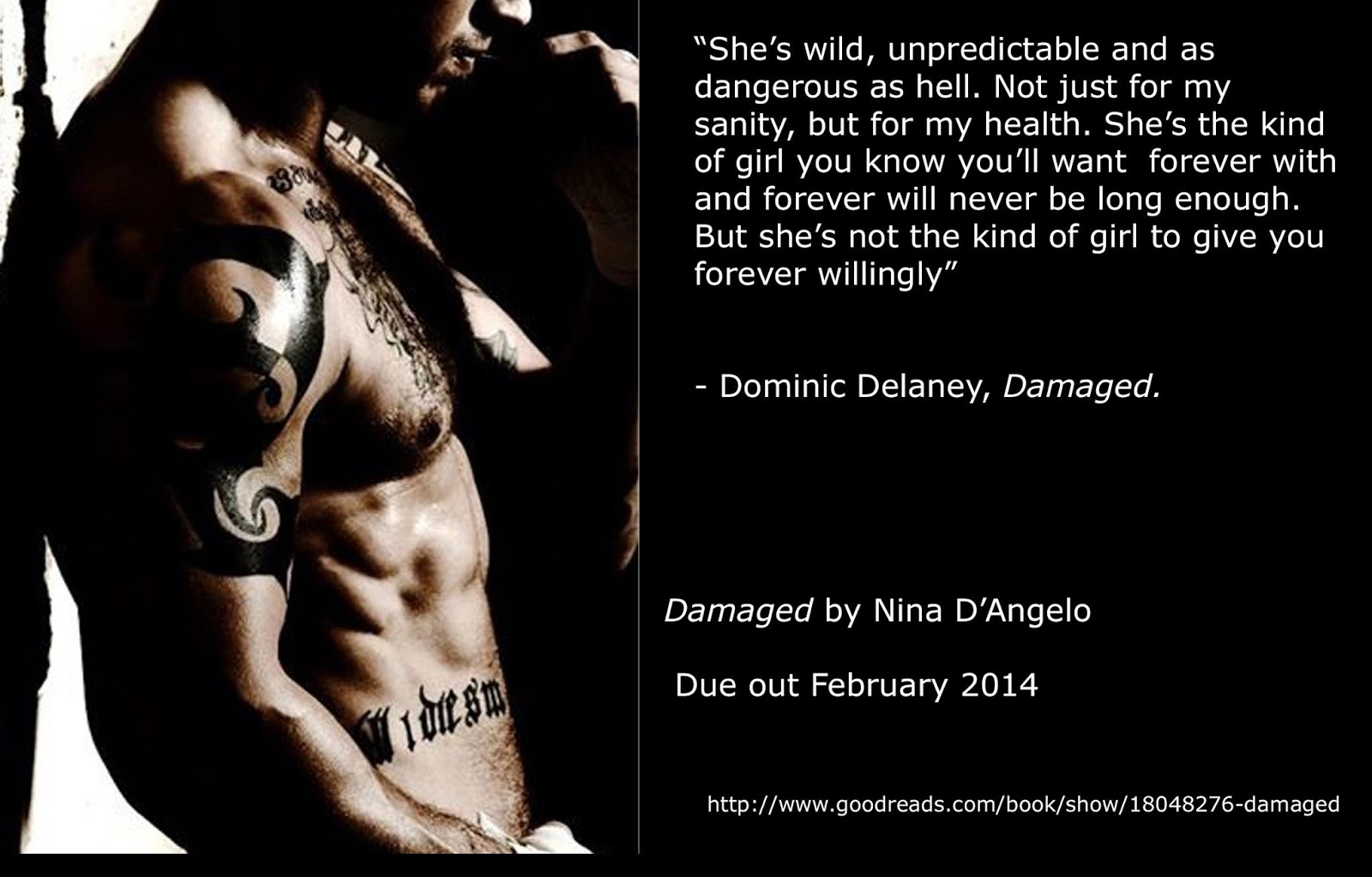 “For seven hours, we hung out at 25, drank coffee and just talked about anything and everything,” he admitted, standing up and stretching. “She’s gorgeous, Ty, inside and out. She’s wild, unpredictable and dangerous as hell. Not just for my sanity, but for my health. She’s the kind of girl you know you’ll want forever with, and forever will still not be long enough. But she’s not the type of girl to give forever to you willingly. I’m pretty sure you’d have to drag it out of her, kicking and screaming."

Taking a deep breath, he shoved his hand into his gym shorts pockets. “I don’t know what to do about it. She has a boyfriend. Hell, I have Sandra. We’re friends.” He snorted at the last word. “If you discount the fact that the whole seven hours I was with her I imagined her under me.”

“So, you’re in lust. Work it out on Sandra,” Tyler suggested, watching Dominic walk to the boxing bag and stare hard at it. He flinched when Dominic suddenly swung hard at the bag, swearing fluently as he drove his fist into it.“That’s the problem, Ty. It’s not lust. I’m not denying I want to lose myself in her. God, I’d give anything to have her legs around my waist as she moaned my name. There’s no guy in his right mind that wouldn’t.

I sat and watched her for a month without approaching her. For an entire month, we silently flirted with each other without saying one damn word. It was like a game we played. But it’s her eyes that drew me to her. I could easily lose myself in them. Christ, Ty, they reveal such pain. Jesus, there’s so much agony there. I want to know why. I want to make her forget that pain. I want—” He broke off, frustration eating at him. “I want to know her.”

Author Interview
1. So first off, I'm a librarian. :) Do you have any good library stories?
No really good library stories but I used to love spending my free periods in high school curled up in a corner of the library reading. I love libraries. I find them comforting.

I was in New York in December, I ended up going to the New York State Library. For anyone who has never been and loves libraries and books, this place is a must. The stained glass in the building is breath-taking beautiful but so are the vintage books that are display.

2. What is your writing style like?
I think I’m stronger with dialogue than I am with description. I also prefer fast paced writing rather than slower writing styles. I think I mainly write about topics I am passionate about and I like my stories to stand out and be original. I want to write a novel that isn’t like any others and also want it to stand out.

I’m also a big believer in characters that are flawed. I don’t want to write about perfect characters. Yes, I will have characters that are beauty or handsome but they will also be deeply flawed. Take Stephanie Carovella for example. There is a high emphasis on how beautiful she is, but she’s so completely damaged and flawed. She’s got demons that nobody should ever have and she has walls around her but she is a real character. She is flawed but to me she is perfect because she’s not one dimensional. She’s as real as she can be.

3. Who are some of your favorite authors? Favorite books or genre?
I read widely so there isn’t one genre I love more than the other. I am a big fan of crime though and fell in love with James Patterson and Patricia Cornwell’s novels from the moment I read them. They have strong characters and brilliant and twisted plots. With James Patterson you get to see things through the eyes of the killer and that’s what I love. I also like with Patricia Cornwell that she writes from behind the scenes and takes you to another place where forensics are concerned.

I’m also a sucker for a good romance, especially with Alpha males and real characters.

Favorite books would be Stephen King’s The Stand, James Patterson’ Kiss the girls and I have to admit I love anything by Kristen Ashley but the Rock Chick series is my favorite. I’m pretty certain Lee Nightgale is my perfect dream man.

4. Honestly, I loved Damaged. Great story and fantastic characters. I'm excited for what's to come next, can you give us some hints??
Thank you!!! I’m always slightly stunned when people love my novels and I was very nervous about writing Damaged. It’s my first hand at romance and it actually came about from readers asking me to write the backstory of Stephanie Carovella and Dominic Delaney.

Next up, I am in the process of editing Nowhere to Run. There are a lot of errors in the first Stephanie Carovella novel, which is unacceptable for me so I am doing a complete clean up and bringing a proofer in to clean up what I’ve missed. I also need to clean up Nowhere to Hide, as I have changed a character’s name.

While I’m juggling this, I am also planning at least two more novels this year. The plan is to start writing Shattered, which is the second in the Outlaws series and will be centered around Jaxon and you will also meet a new character named Lexi.

I’m also planning to write the third in the Stephanie Carovella series called Deadly Secrets and if I can squeeze it in, I will start the first of the Callendor Studios series, which is tentatively called Lucky. So, as you can see I have a really busy year planned.

Shattered is another romance as is Lucky and Deadly Secrets is romantic suspense. I can’t wait to share them with everyone!!!

My Thoughts
Gorgeously written, Damaged is so ravaged and raw I set it down several times. Not because it was bad, no, because I was so emotionally attached to both the characters and the story. I love a good character driven story and D'Angelo has given us a fantastic one. Stephanie and Dominic are so different yet have so many similarities, I loved seeing them fall in love. I don't want to give too much away, but if you love bad boys Dominic is for you. Shattered and put back together again, Damaged may have just damaged me! 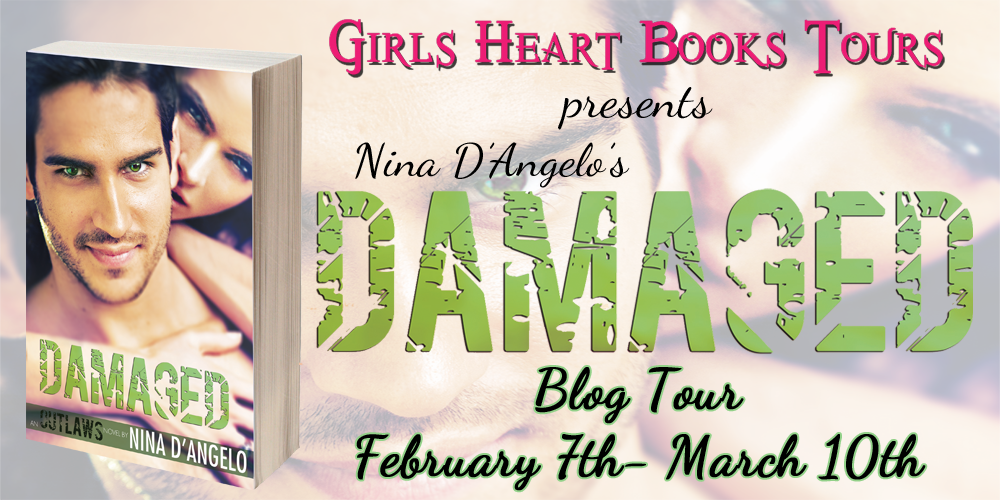