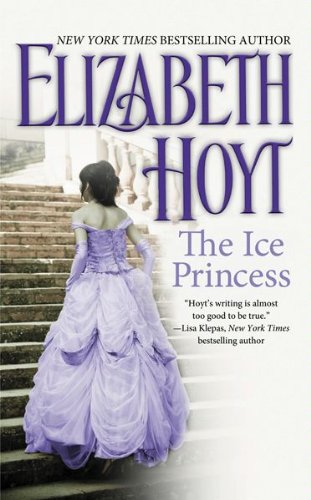 "The Ice Princess"
By: Elizabeth Hoyt
Synopsis from Amazon:


As the madam of Aphrodite's Grotto, the most infamous brothel in London, Coral Smythe knows everything possible about men's needs and desires. Yet she's never experienced the love of a single man-not even that of Captain Isaac Wargate whose hawk-like eyes stare at her with both condemnation...and lust.

SEVEN NIGHTS OF ECSTASY
Captain Wargate heartily disapproves of the sensuous madam who always wears a golden mask. She lures his officers from both his ship and their duty. But when Coral herself is offered up as the prize in a game of chance, Wargate impulsively enters...and wins.

SEVEN NIGHTS OF LOVE
Now the puritanical navy captain has just seven nights to learn everything he can about the mysterious madam and what she knows of a man's desires. But when Coral is threatened by the new owner of Aphrodite's Grotto, will Wargate take a chance on the woman beneath the mask...and on love?


“The Ice Princess” is the fourth installment of the “Princes” series by Elizabeth Hoyt. It follows the books “The Raven Prince,” “The Leopard Prince” and “The Serpent Prince” while telling the story of Coral Smythe who appears in the first novel. Appearing as a short novella, Hoyt does a wonderful job of showing how wonderful a short romance can truly be.
Coral Smythe appeared as the mistress of a lord when she first appeared in the series. At the end of “Raven Prince” you see Coral as Aphrodite, a Madame at one of the most famous brothels in London. When the novella opens, Coral is still the Madame but has fallen are hard times. She has had to borrow money from some pretty unscrupulous people and is somewhat at their whim. When one of them, as a way to kind of put her in her place, offers her intimate services for seven days to whoever wins a game of cards.
Captain Wargate has come to the brothel for a drink, but decides to save Coral from these despicable people and actually wins the seven days. I know this doesn't sound like the best set up for a romance, but it is pretty uniquely wonderful. Wargate and Coral slowly get to know one another, something neither one thought possible. They learn eachother's likes and dislikes and who they really are as people, not just brothel owner and captain.
Hoyt is a master story teller. Everything she writes I simply gobble up and this is no different. It's definitely shorter than her normal stories, but still magical. The romance is very romantic and you love the characters. Perhaps the best part, the characters truly end up with the person who complements them the best. A great romance to read on a rainy afternoon!