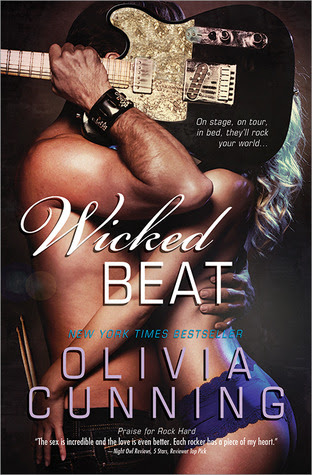 
From the moment he lays eyes on Sinners’ new front of house soundboard operator, drummer Eric Sticks knows he has to make Rebekah his. Unfortunately, she’s too busy trying to seduce guitarist Trey Mills to pay him much attention. Rebekah never planned to fall for the tall, goofy drummer with the weird sense of humor and a heart the size of the galaxy. But Eric makes her laugh and his constant attention makes her feel sexy and irresistible–exactly what she needs after the things her last lover said to her. A woman who gives as much as she takes, Rebekah makes Eric feel like a total stud–exactly what he needs after surviving a decade of watching the incredibly talented members of Sinners from the wings.

I’ve been looking forward to Sticks’ story since I read the first Sinners’ novel almost two years ago. There’s just something about a drummer that does it for me I tell ya! Released last in the series but coming chronologically as the fourth book in the five part series, Wicked Beat tells of the wild relationship between Drummer Eric Sticks and soundboard operator, Rebekah.
Rebekah begins the novel with a huge crush on Trey, guitarist and ultimate badboy of the Sinners rock band. Filling in for her brother as he is recuperating from a severe bus crash, Rebekah goes on the road with the five band members. Trying to fit in, do a good job, and still live up to the standards her brother had while working, Rebekah finds herself drawn to Eric, who tries to help her in any way he can.
So going in with a hopefully open attitude, I have two feelings about this one. It started out strong and seemed to be the Sinners’ group that I loved so much in the beginning. The interaction between the band members was there and it seemed like the old Olivia Cunning was back.
Then I began the second half of the story and it seemed like a foreign land to me. It almost appeared as if she had stopped writing for a while and then tried to pick it up again. The whole feel of the novel was changed. Rebekah’s motivations were different, there was a whole religious aspect that didn’t jive the story and just unnecessary conflicts that didn’t add anything to the relationship. I found myself skimming and even skipping pages because it seemed redundant or just dumb. Finally I gave up the book and just read the last few pages to find out what happened, which I absolutely HATE to do. Ugh.
So am I happy I read this book? Well, I guess for the sake of finding out Sticks’ story I am. Was it a good story? It started out that way but fell flat for me, which was disappointing. For those that are fans of the Sinners series, I find the first two books are extremely strong and stand up well but the following three are disappointing. I’m hoping with Cunning working a new series, things will improve. I’m going to try her next book but if its anything like her last few books, I might have to give up this once promising emerging author.