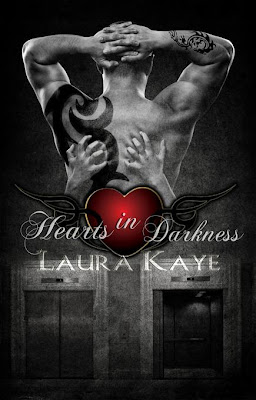 
Makenna James thinks her day can't get any worse, until she finds herself stuck in a pitch-black elevator with a complete stranger. Distracted by a phone call and juggling too much stuff, the pin-striped accountant caught only a glimpse of a dragon tattoo on his hand before the lights went out.       Caden Grayson is amused when a redhead literally falls at his feet. His amusement turns to panic when the power fails. Despite his piercings, tats, and vicious scar, he's terrified of the dark and confined spaces. Now, he's trapped in his own worst nightmare.       To fight fear, they must both reach out and open up. With no preconceived notions based on looks to hold them back, they discover just how much they have in common. In the warming darkness, attraction grows and sparks fly, but will they feel the same when the lights come back on?

I initially found “Hearts in Darkness” on one of those lists that recommend boosk if you liked “Fifty Shades of Grey.” The concept sounded intriguing and I looooved the cover! Surprisingly, I ended up really liking this novel, even though more than half of the story takes place in the complete dark in an elevator.
Makenna and Caden are busy and hardly notice one another when they get on the same elevator. A quick glimpse and suddenly the elevator stops,the lights go out, and they are trapped in the elevator with just the two of them for company. At first uncomfortable with one another, as the hours pass they increasingly become more aware of one another. They share stories of their childhoods, they talk about their families, they truly come to know one another.
It's a strange concept, yet it works on so many levels. The romance in this story isn't based on looks, gazes, or how the outside world treats the two people. It's just the two, in the dark, with only conversation. I wish sometimes the world was this way, instead of worrying how we looked like and instead knowing what our souls are like.
It's billed as an erotica story and there are elements there, yet not so much for it to be 'officially' in the genre I don't think. There are some hot scenes but very little actual sex. Most of the novel is actually conversation. What the novel loses in scenery and plot twists, it gains in character development. I loved both Makenna and Caden and if anything, hoped they would have been in the stuck elevator even a little longer.