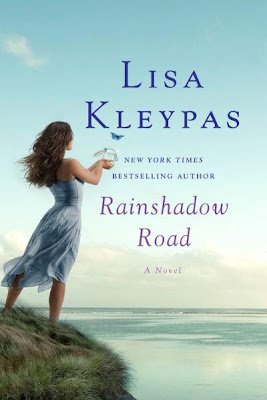 "Rainshadow Road"
By: Lisa Kleypas
Synopsis from Amazon:
Lucy Marinn is a glass artist living in mystical, beautiful, Friday Harbor, Washington.  She is stunned and blindsided by the most bitter kind of betrayal:  her fiancé Kevin has left her.  His new lover is Lucy’s own sister.   Lucy's bitterness over being dumped is multiplied by the fact that she has constantly made the wrong choices in her romantic life.   Facing the severe disapproval of Lucy's parents, Kevin asks his friend Sam Nolan, a local vineyard owner on San Juan Island, to "romance" Lucy and hopefully loosen her up and get her over her anger. Complications ensue when Sam and Lucy begin to fall in love, Kevin has second thoughts, and Lucy discovers that the new relationship in her life began under false pretenses. Questions about love, loyalty, old patterns, mistakes, and new beginnings are explored as Lucy learns that some things in life—even after being broken—can be made into something new and beautiful.
My Thoughts:
I love Lisa Kleypas books. There, I said it. I love them. They make me happy. They are the kind of book you can pick up at any time, read it, and end up smiling. While “Rainshadow Road” isn't going to go down as my favorite romance of all time, it did leave me smiling.
Lucy is living in Friday Harbor, pretty much having a perfect life, until her sister and her boyfriend (Kevin) decide they are in love and want to get married. Pretty much leaving Lucy shocked, alone, and heart broken.
Sam has known Kevin since they were younger, but is surprised when Kevin asks him to pretend to date Lucy. Kevin thinks that if Lucy finds a new man, his new girlfriend (Lucy's Sister) will like him better and her family will be better able to accept the switch. Got all that? Sam kind of goes with it and yet doesn't...its kind of a weird situation, but he does become interested in Lucy.
Lucy and Sam are kind of thrown together in a weird mad romance that at points make you go what? They have seen each other like two times and suddenly Lucy is staying at the Nolan's house. I actually read this part 2x because it seemed to come out of left field. I also think Sam was kind of shady in his dealings with Kevin, instead of coming out and telling Lucy he knew him it was kind of kept as a secret. I know it probably needed to be that way for plot but it was annoying.
The characters aren't as fully developed as they are in the predecessor "Christmas Eve at Friday Harbor" and the plot isn't as tight, but you do come to enjoy Sam and Lucy. They verbally spar for most of the novel which I always enjoy. Quick wit is always fun and Sam is full of it. I also liked delving into the Nolan family again and hearing more about the characters from the first title. I'm looking forward to "Dream Lake" coming out later this year!