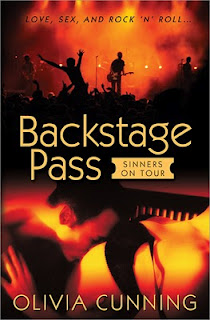 
It’s been months since Brian Sinclair, lead guitarist for the famous rock band, Sinners, composed anything. Unable to write the music that once flowed so naturally, Brian is lost without his musical mojo. But when sexy psychology professor Myrna Evans comes on tour to study groupie mentality, Brian may have found the spark he needs to reignite his musical genius. When lust turns to love, will Brian be able to convince Myrna that what they have is more than just a fling, and that now that he’s found his heart’s muse, he doesn't want to live without her?

My Thoughts:
“Backstage Pass” was a find on Goodreads a few weeks ago. It had some pretty great reviews, but I was a little skeptical. I’m more of a classic romance kind of girl, so I was a little wary of the synopsis. I shouldn’t have been worried, I was utterly swept away into the rock band world of the Sinners and the romance between Brian and Myrna.
Myrna (and lets get this out there, this is the only romance I know of with this for a heroine's name) is a professor who has used the Sinners music to teach in her classroom. One evening while at a professional conference, she looks up and suddenly sees the entire band at a table in the hotel restaurant. She walks up and suddenly is entranced by the lead guitarist, “Master Sinclair.”
Brian is used to women throwing themselves at him, but he sees something different in Myrna. As they start out in their relationship, Brian is insecure not believing Myrna actually sees him, instead being impressed with his rock star persona. Yet Myrna sees Brian for who he truly is, his interests in music, his friendships with his band mates...he's more than just a rock star in her eyes.
I loved this book! As I said, I was a little apprehensive but so many other people had enjoyed it and I decided I better try it. I thought the characters were excellently characterized and the romance was brilliantly done. The idea of Myrna being a professor and falling in love with a rock star was excellent and I enjoyed the similarities between the two while the differences made me smile. The rest of the band mates were hilarious, fun, and very much a family. My favorite scene would have to be when Myrna takes the Sinners to the grocery store and they act just like 5 year olds.
“Backstage Pass” is an amazing first book in the Sinners on Tour series. “Rock Hard” continues the series and is Sed, the lead singer's tale. Be warned, the novel is considered erotic, so if you aren't ready for some hot scenes you may want to pass. Otherwise, the romance is often funny, romantic, and just in general a wonderful story.