"More Than Meets the Ink" By: Elle Aycart Review 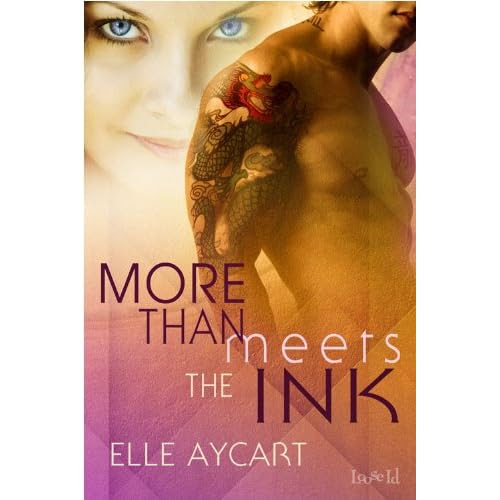 "More Than Meets the Ink"
By: Elle Aycart
Synopsis from Goodreads:


Wickedly sexy James Bowen is a bad boy of the highest order -- tattoos and attitude included -- which unfortunately ranks way up on Tate’s not-a-chance-in-hell list, right there along with skydiving naked over Teheran and juggling Ebola vials just for kicks. But what the heck, she’s on holiday, the guy is absolutely irresistible, and she needs to unplug from her life. With her dad and brother gone, Tate is left to deal with the family restaurant, which is fast going down the drain. Her employees are acting out, her boyfriend has bailed out, and her very own private stalker is emailing her to death with lovely threats of doom, fire, and dismemberment. So yeah, maybe a little holiday fling is in order. Strictly sex though, and no follow-up whatsoever once.       She hadn’t counted on her take-charge holiday fling having an opinion of his own and stubbornly sticking around, before and after the sex, making himself at home in her life. There is definitely more to James than meets her prejudiced eye, and even if she's not ready to look deeper, James isn't prepared to permit her not to.

My Thoughts:
Again I have plunged into the depths of those “If you liked 50 Shades...” lists on Goodreads and came out with “More than Meets the Ink” by: Elle Aycart! I was incredibly surprised by how much I ended up liking this funny, sweet, kinda hot romance from a relatively new author. How do I know this? Because as soon as I finished, I immediately hopped over to Barnes & Noble to get another book by her and they aren’t even out yet!
James and Tate both meet while visiting their parents at a senior housing complex in Florida. As with all good romances, even though they are meeting in Florida, they both happen to live in Seattle (yay!). Tate decides she wants a fling with James and James is more than happy to oblige.
Yet after their brief stay in Florida, when life returns to normal, James doesn’t want the fling to end. He is interested in more than just the obvious, he wants to help Tate with her restaurant and introduce her to his family. Tate is hesitant because, and granted this is a little silly, James is kind of wild looking with tattoos and this mkes her nervous. Silly I know and it's a plot device used over and over but I just kind of read over that part.
Why did I like this book? Completely James. Absolutely the hero. Tate I could have cared less about, but James was so excellently written I felt like I knew him. He was funny, caring, tough, and pretty awesome just in a general sense.
“More than Meets the Ink” is funny, romantic, and a pretty fun romance. The second title in what I’m hoping will be a series (hoping for James’ brothers) will be called “Heavy Issues” and will feature Cole, James’ brother. Not as intense as Fifty Shades, Elle Aycart gives you that intense hero we’ve been missing!