It's Monday! What Are You Reading???

From the hugely popular blog, a miscellany of hilarious and peculiar bookshop moments:'Can books conduct electricity?''My children are just climbing your bookshelves: that's ok... isn't it?'A John Cleese Twitter question ['What is your pet peeve?'], first sparked the 'Weird Things Customers Say in Bookshops' blog, which grew over three years into one bookseller's collection of ridiculous conversations on the shop floor. From 'Did Beatrix Potter ever write a book about dinosaurs?' to the hunt for a paperback which could forecast the next year's weather; and from 'I've forgotten my glasses, please read me the first chapter' to'Excuse me... is this book edible?' 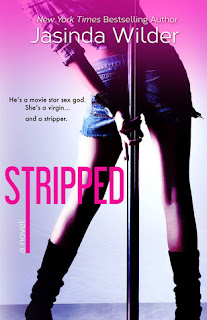 So how did I get myself into this situation, you ask? Simple: desperation. When you're faced with being homeless and hungry or taking off your clothes for money, the choice is easier than you'd imagine. That doesn't make it easy, though. Oh no. I hate it, in fact. There's nothing I'd like more than to quit and never go into another bar again, never hear the techno beat pulsing in my ears again, never feel the lecherous gazes of horny men again.Then, one day, I meet a man. He's in my club, front and center. He watches me do my routine, and his gaze is full of hunger. Not the kind of desire I'm used to though. It's something different. Something hotter, deeper, and more possessive. I know who he is; of course I do. Everyone knows who Dawson Kellor is. He's People Magazine's Sexiest Man alive. He's the hottest actor in Hollywood. He's the man hand-picked for the role of Rhett Butler in the long-awaited remake of Gone With the Wind. He's the kind of man who can have any woman in the entire world with a mere crook of his finger. So what's he doing looking at me like he has to have me? And how do I resist him when he looks at me with those intoxicating, changeable, quicksilver eyes? I'm a virgin, and he's an American icon of male sexuality. I'm a stripper, and he's a man used to getting anything and everything he wants. And he wants me. I know I should say no, I know he's the worst kind of player…but what my mind knows, my body and my heart may not.And then things get complicated...

Jet McAlister has a secret. Eddie Chavez has the hots for Jet (not to mention Eddie’s just plain hot). Jet has too many problems to realize that Eddie’s interested. Eddie loses patience when Jet ends her waitressing shift at a strip club with a knife at her throat. Since Eddie’s a cop, he figures he can help. Since Jet’s used to solving everyone’s problems she doesn’t want Eddie’s help.Throw in a Dolly Parton look-alike, a gruff but lovable strip club owner, Jet’s ne’er do well father, his ne’er do well friend, Bear, Bear’s long-suffering, chain-smoking wife Lavonne and the crew from Rock Chick and you’ve got Rock Chick Rescue.Rock Chick Rescue takes you on a wild ride with Jet, Eddie and the gang as they wrestle bad guys in a bagel shop, hit Denver’s backstreet poker tables (with big hair), and help the strippers at Smithie’s take down a would-be murderer.Through this, Jet’s got to learn that even when life made you give up your dreams, you can still end up with the (hot) guy. Eddie’s got to rescue Jet from a bad man (so he can do better things with her) and teach her that some dreams can come true.

I'm at loss for what to read next...sooo, what are you reading today???
Posted by The Brunette Librarian at 11:07 PM