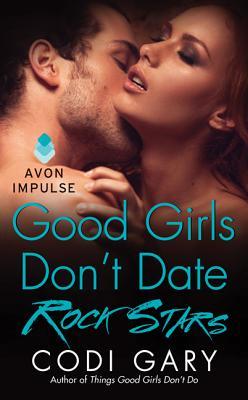 She also didn't count on running into her old flame—and her son's father-turned-country rock star—Travis Bowers, followed by a night of drunken dares. Apparently one of those involved a ring on her finger and a vow … neither of which she intends to keep. Now with a hangover from hell, this good-girl-gone-bad knows there's just one thing to do: run.

Travis has been all over the world, but Gemma has never been far from his thoughts. So when they had the chance to catch up over a few drinks, he didn't hesitate. Of course, he didn't expect it would lead to marriage, or a runaway bride! Travis finally has a second chance and doesn't plan on losing Gemma again—or the son he didn't know he had. He proposes, albeit belatedly, a date. Or rather, a few. If they can make this marriage work by starting over, he stays. If not …

Gemma's not interested; she's got a son to protect and a heart to heal. But having Travis around could make both a little easier. Still, good girls don't date rock stars . . . right?

Gemma finds out the hard way that some things that happen in Vegas, don’t stay in Vegas. When she wakes up with a ring on her finger put there by ex-boyfriend Travis, who just happens to be one of Country’s biggest stars, she panics and drives ten hours straight back to Idaho. How can she tell him she should have believed him and never have left him all those years ago? And the whole business of their son she never told him about is going to be a bit messy.
So starts Good Girls Don’t Date Rock Stars, with a bit of a bang if you will. Travis, said rock star, fell in love with Gemma as a teenager. In and out of foster homes, he never had a true family and only two loves in his young life, music and Gemma. When life on the road gets the best of them, Gemma and Travis drift apart, with more than a few secrets held back from one another.
Life has a way of getting the best of us, and with her newest novel, Codi Gary shows us how we can always find a way to make it work. Seemingly insurmountable odds are against both Gemma and Travis, but even through the paparazzi’s lenses, they find a way to love one another again and become a true family.
One of my favorite things about Gary’s books are the secondary characters. Don’t get me wrong, the main characters are awesome (and some pretty amazing naughty scenes, meow) but she writes the background characters almost as fully as she does everything else. They have personalities, quirks, and you want to read as much as about them as anyone else. From the sassy barista down the road to the computer repairman with a penchant for trout fishing, Gary creates a rich backdrop for her characters to fall in love.
Codi Gary is one of my new favorite authors. She writes sweets stories with the right amount of spice that are just plain witty and fun. This book can be absolutely read by itself, but if you fall in love with Codi Gary’s book as I have done, be sure to read Things Good Girls Don’t Do.