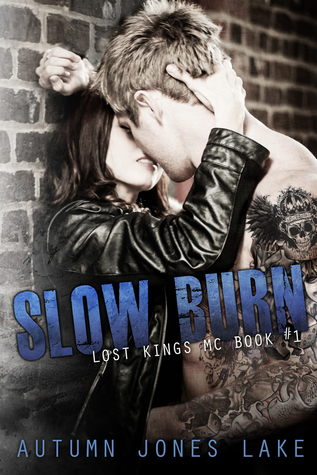 Forced to represent an outlaw biker, a married attorney must come to terms with her feelings for her client while avoiding the danger he brings into her sedate life.
President of the Lost Kings MC, Rochlan "Rock" North, hasn't managed to find a woman capable of making him want to curb his wild ways—until he meets sweet, innocent, married lawyer Hope Kendall.
Forced to represent the outlaw biker, Hope is rattled by her immediate attraction to Rock. Hope is a good girl in a good marriage. Rock thrills her, but she's not going to throw away everything she's built on a fling with her criminal client.
Rock respects Hope enough to leave her alone, even as he realizes he's become a little obsessed with her. When their connection endangers her life, he'll have to destroy her in order to save her.
After tragedy strikes, Rock is determined to earn Hope's forgiveness and convince her that even with their staggering differences, they're meant to be together.


My Thoughts
Rock first meets Hope when he’s shackled and in court for a minor drug allegation. Needing an attorney, Hope is appointed by the court to represent Rock at a moment’s notice. This brief interaction leads into over two years of infatuation, flirtations, and ultimately a rocky road to romance.
Hope is a lawyer, married at the beginning, who is somewhat naive at how the world works. Rock is the President of a local MC and is the king in his world. After tragedy befalls Hope’s marriage, she falls into a deep depression and finds herself alone in the world. Rock falls deeply in love with Hope but questions how much he can truly tell her about his life. Coming from completely different backgrounds, Rock and Hope struggle to find one another in this volatile world.
I am incredibly surprised at how much I enjoyed this book. I haven’t had much luck with motorcycle club books lately and was delightfully surprised at how unique Slow Burn turned out to be. Super sexy but just a flat out good story, I loved both the hero and heroine. Rock is strong and steadfast, but loyal and utterly fallen for Hope. Hope is an attorney, highly educated and just out of a long term committed relationship. She finds Rock irresistible and steps into his world confidently yet a bit hesitantly. Simple, sexy, heartfelt, and fast paced, I fell in love with the world created and can’t wait to read what’s up next.

Email ThisBlogThis!Share to TwitterShare to FacebookShare to Pinterest
Labels: ****, 2015, 2015 Where Are You Reading, Library Review