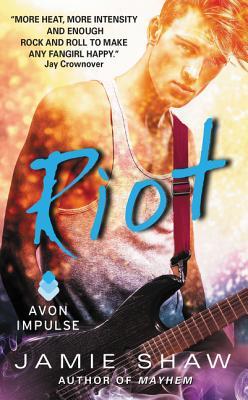 When Dee Dawson meets sexy mohawked guitarist Joel Gibbon, she knows it won’t be long before she has him wrapped around her finger. No guy has ever been able to resist her… but Dee’s met her match in a player like Joel.

Dee’s not the relationship type—not after seeing the pain “love” has caused her friends and family—yet she’s desperate to make Joel want her more than anyone else. He quickly becomes an obsession, and when a reckless attempt to make him jealous ends in disaster, Dee turns into the damsel in distress she never wanted to be. With her carefree world crashing down around her, the last thing she needs is Joel’s pity.

But Joel is suddenly determined to prove he cares, and no matter how hard Dee tries to push him away, he refuses to let her shut him out. Now the girl who swore she’d never say those three little words must choose between guarding her heart and losing Joel forever… or falling head-over-heels for the tattooed rock star of her dreams.


My Thoughts
First off, I am going to be completely honest and say that you can read this book as a standalone if you absolutely must. If you can however, read Mayhem. It’s Adam and Ro’s story and absolutely adds a ton to this story. Regardless though, Jamie Shaw knocks Riot out of the park and has an anxiously awaiting reader here in Missouri.
Dee Dawson has a huge attraction for rock and roller guitarist, Joel Gibbon. Content as a hook up for several months, she begins to want more than a casual night of no holds barred passion. Joel doesn't want or need a girlfriend and is content to leave their relationship the way it is. After a harrowing attack on Dee that leaves her traumatized, Joel realizes that his feelings for Dee run deeper than he ever imagined.
I adore the world that Jamie has created. Filled with great main characters, extraordinary secondary characters, and really fun sexy times, Shaw writes unique stories. What I loved the most is how excellently she really writes 20-somethings. No one has everything figured out and she allows her characters to change and grow without assuming anything. Sure you know there will hopefully be a happy ending, but beyond that, her books don’t seem to follow a formula and are ultimately delightful.
Fans of Jay Crownover will have a new author in Jamie Shaw. A great writer with wonderful characters, Shaw’s take on the rock star world is fresh and fun. Fast paced with plenty of angst and a lovely happily ever after, Shaw’s books seem to only get better as time goes on.