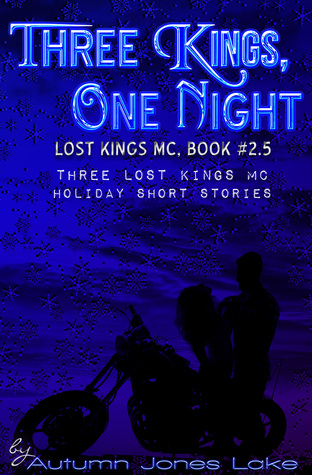 Three short Holiday stories set in the Lost Kings MC world.
1) Murphy and HeidiSpending Christmas Eve with his best friend's little sister will be a challenge for Murphy. Especially when a would-be boyfriend stops by and Murphy realizes there's a lot he doesn't know about Heidi these days.

2) Wrath and Trinity (note: this story takes place between Part 1 and Part 2 of Slow Burn.)When Wrath and Trinity find themselves in the clubhouse alone together on Christmas Eve, will they be able to set aside their animosity for one night?

3) Z and LillyZ has a surprise for Lilly, but will it be enough to make her break her number one rule, and let him spend the night?


My Thoughts
Things in the Lost Kings MC just keep getting better and better! I somehow missed this holiday collection when I was reading Slow Burn and Corrupting Cinderella. I am so glad to have read Three Kings, One Night as it perfectly complements the series and just leaves you hungry for more.
This holiday bundle has three short vignettes featuring couples from the Lost Kings MC. Rock and Hope sadly don’t make an appearance but they've already had two full length stories, so its understandable. I was most excited for Wrath and Trinity because boy do I like me some Wrath.
Each story is a brief glimpse into their lives and possibly their own stories. I thought this was an extremely clever way to have the reader invest in the future of the series while also whetting our appetites for a bit more. Readers had never been in these characters heads before and had only briefly met them through interactions between Rock and Hope.
Wrath and Trinity are scheduled to have their own story in 2015 and I am eagerly anticipating Z and Lilly’s addition as well. I loved the anticipation of Murphy and Heidi and am content to wait until they are both a little bit older. Autumn Jones Lake has a fantastic way of writing, creating a world that I could definitely get lost in. Sexy, fast paced, and action filled, this holiday set of novellas is the cherry to the Lost Kings cake!

Email ThisBlogThis!Share to TwitterShare to FacebookShare to Pinterest
Labels: *****, 2015, 2015 Where Are You Reading, Library Review