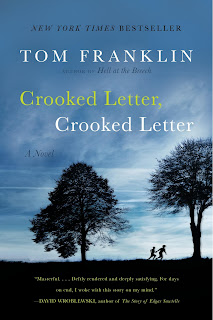 In the 1970s, Larry Ott and Silas "32" Jones were boyhood pals in a small town in rural Mississippi. Their worlds were as different as night and day: Larry was the child of lower-middle-class white parents, and Silas, the son of a poor, black single mother. But then Larry took a girl to a drive-in movie and she was never seen or heard from again. He never confessed . . . and was never charged.
More than twenty years have passed. Larry lives a solitary, shunned existence, never able to rise above the whispers of suspicion. Silas has become the town constable. And now another girl has disappeared, forcing two men who once called each other "friend" to confront a past they've buried for decades.

My Thoughts:
This is a 3 Star out of 5 Star book. I enjoyed it but didn't love it.
Things that I enjoyed-
1. I liked the interaction between the characters of Larry and Silas. Larry was a sympathetically complex character. I enjoyed Silas and felt if I had met him in real life, I would have him as a friend.
2. The mystery was interesting. It was a different kind of story that was approached in a different way. The racial elements of the time were an interesting twist on the missing girl story that made it a "wonder what's gonna happen next" kind of story.
Things that I didn't enjoy-
1. I am not going to spoil anything, but the mystery was incredibly easy to solve. Within the first few chapters you can tell who caused the first girl to go missing and within a few pages you figure out the second girl's disappearance.
2. The big twist in regards to Larry and Silas seemed manufactured just for the sake of it.
3. I felt so sorry for Larry. He has been accused of this crime and everyone just treats him terribly. I hated feeling so sorry for a character and even in the ending, the true perpetrator being revealed, didn't help it for me.

Posted by The Brunette Librarian at 9:15 PM