"Hotel on the Corner of Bitter and Sweet" By: Jamie Ford Review 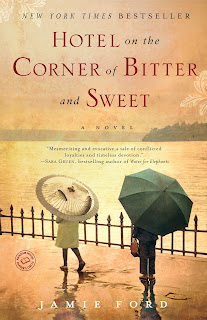 Today's blog we are focusing on a book club pick,
"Hotel on the Corner of Bitter and Sweet" by Jamie Ford.

In the opening pages of Jamie Ford’s stunning debut novel, Hotel on the Corner of Bitter and Sweet, Henry Lee comes upon a crowd gathered outside the Panama Hotel, once the gateway to Seattle’s Japantown. It has been boarded up for decades, but now the new owner has made an incredible discovery: the belongings of Japanese families, left when they were rounded up and sent to internment camps during World War II. As Henry looks on, the owner opens a Japanese parasol.
This simple act takes old Henry Lee back to the 1940s, at the height of the war, when young Henry’s world is a jumble of confusion and excitement, and to his father, who is obsessed with the war in China and having Henry grow up American.

I read this book a few weeks ago and I still don't know what to say about it. There is a lot of character interaction within this book, which I love. Henry's relationship with his son is very reminiscent of the relationship she has with his own father. I enjoyed seeing the similarities and Henry overcoming this area of his life.


I also enjoyed the history involved in the story. I didn't know much about the internment of the Japanese in the U.S. and it shocked me in some instances. I didn't realize they lived in camps and were driven from their towns. I also was surprised at the rampant racism many of the Japanese had to deal with during this time and I felt like I was there as I was reading it.
Things I didn't like...
All in all, I would give it a 3 Star rating out of 5. It's an interesting read but not something fabulous.


Posted by The Brunette Librarian at 3:38 PM