"Widow of the South" By: Robert Hicks Review 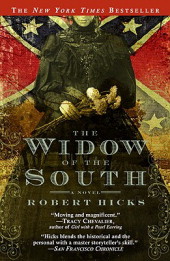 One of the book clubs I belong to recently read the book,
"Widow of the South" by Robert Hicks.

"Widow of the South" tells the story of Carrie McGavock, her family, her slaves, and the soldiers involved in the Battle of Franklin, Tennessee.

Synopsis (from BN.com)
In 1894 Carrie McGavock is an old woman who has only her former slave to keep her company…and the almost 1,500 soldiers buried in her backyard. Years before, rather than let someone plow over the field where these young men had been buried, Carrie dug them up and reburied them in her own personal cemetery. Now, as she walks the rows of the dead, an old soldier appears. It is the man she met on the day of the battle that changed everything. The man who came to her house as a wounded soldier and left with her heart. He asks if the cemetery has room for one more...
The novel flashes back thirty years to the afternoon of the Battle of Franklin, five of the bloodiest hours of the Civil War. There were 9,200 casualties that fateful day. Carrie's home -- the Carnton plantation -- was taken over by the Confederate army and turned into a hospital; four generals lay dead on her back porch; the pile of amputated limbs rose as tall as the smoke house. And when a wounded soldier named Zachariah Cashwell arrived and awakened feelings she had thought long dead, Carrie found herself inexplicably drawn to him despite the boundaries of class and decorum. The story that ensues between Carrie and Cashwell is just as unforgettable as the battle from which it is drawn.

My Thoughts:
The story was solid but I would have enjoyed it more if it had been a purely nonfiction piece. Within the story there were elements of romance between Carrie and a soldier named Zachariah that seemed strained. Carrie's husband was there throughout the story and the author wanted him to be a strong character, but he never really seemed real to me. Her children are pretty much the same...the author wanted them to be main characters and be influential but they never reached that potential.
Each chapter of the book is told from the point of view of a different person. At the beginning of the book, the writing is distracting to the reader because you have a hard time figuring out who is who. The author just kinds of expects you to know who everyone is. So if you read this book, I highly recommend writing down the characters as you begin so you can understand who people are from the beginning.
The story was fun though. The relationships between the soldiers was interesting to read and the writing gives you a feeling of actually being in the home during the battle. Carrie's relationship with Zachariah seems strained but at the end, you want love to prevail. Our book group overwhelmingly enjoyed the story and if your a fan of the Civil War era, this is a great book to read. If you are reading it for a romance or a mystery, it falls flat. All in all, I would give it 3 stars out of 5.
The real Carrie McGavock was known as "The Widow of the South."  During the battle of Franklin, Tennessee (November 30, 1864) Carrie's home was appropriated by the Confederate Army for a War Hospital. The Confederates suffered 6,252 casualties, including 1,750 killed and 3,800 wounded. Hundreds of people were brought to her home with very few doctors or nurses. The slaves remaining and Carrie's family ministered to the wounded soldiers, with no training and little medicine to help.
After the battle, Carrie set about creating one of the largest civil war cemeteries basically in her backyard. She and her husband, John McGavock, along with neighbors and friends dug up the bodies that had been buried and re-interred them in the Carnton Cemetery. They paid special attention to who was where and reburied the soldiers according to the states they had represented. A truly remarkable true story that shows human perseverance and hardships encountered in life.

For more information on the real Carrie McGavock, please refer to the following sources:
<3, Rachael

Posted by The Brunette Librarian at 12:00 PM