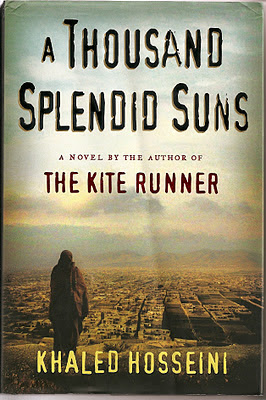 I just finished "A Thousand Splendid Suns" by Khaled Hosseini,
and can't wait to talk about it!

A Thousand Splendid Suns is a breathtaking story set against the volatile events of Afghanistan's last thirty years — from the Soviet invasion to the reign of the Taliban to post-Taliban rebuilding — that puts the violence, fear, hope and faith of this country in intimate, human terms. It is a tale of two generations of characters brought jarringly together by the tragic sweep of war, where personal lives — the struggle to survive, raise a family, find happiness — are inextricable from the history playing out around them.

My Thoughts:
"A Thousand Splendid Suns" by Khaled Hosseini is essentially the story of two very different women pushed together by fate and war. The story essentially evolves around two women and their "shared" husband.
The first part of the book tells the story of Mariam, a poor Afghan girl born the illegitimate daughter of an Afghan merchant. Her life is poor, she lives in a hut with her mother, essentially at the edge of town. She thinks she has a good life and loves her father intensely. As always, that idyllic life doesn't continue and she is thrust into a marriage with a much older man (Rasheed) who lives hours away. As Mariam's marriage quickly spirals out of control with abuse, miscarriages, and the harsh life of years of Civil War in Afghanistan...a young girl down the road named Laila is growing up.
Laila is the focus of part two, a happy girl living with her family down the road from Mariam and Rasheed. She has a privileged life with a loving father and an emotionally distant mother. Her siblings are off fighting for Afghan independence. Laila has a close friend named Taliq who eventually becomes her romantic interest. Through the course of events Tariq and her parents are taken from her, leaving Laila alone pregnant in the harsh Afghan culture. Laila eventually marries Rasheed and becomes a sister wife to Mariam.
The third part of the story switches between Laila and Mariam. Laila is much younger and with all relationships, Laila and Mariam go through an adjusting phase. Finally the two women create a close relationship with one another through trials and hardships.
The fourth and final part of the story focuses on Laila. I don't want to ruin the ending and give up any spoilers but its exciting and surprising to say the least.

I loved, loved, loved this book and give it five stars! I haven't read such a good book in a long, long time. The characters are richly written, the story seems real, and the women are strong living in a harsh climate. It's simply an incredibly well written book that I think people should read.

To be honest, I would never have read this book if I hadn't had to read it for book club...but I simply loved it.