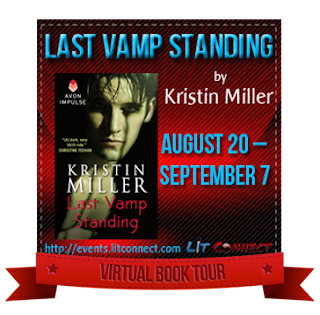 Today we are talking about her
BRAND SPANKING NEW BOOK 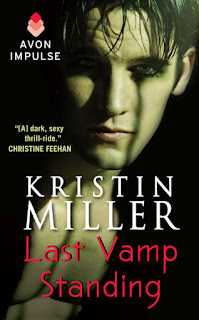 Tortured by demonic voices, Dante’s soul is as black as they come. But when he meets Ariana—an innocent vampire fighting demons of her own—he second-guesses everything he’s ever known about sacrifice, passion, and soul-scorching love.

Before Dante wages war against Crimson Bay’s greatest threat, he must make a choice: love Ariana the way she deserves, risking her life in the process—or fight to protect her, unleashing the monster he’s determined to bury. 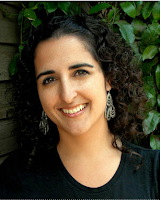 Kristin Miller has had a passion for language and literature her whole life. Born and raised in Small Town USA, she often made up stories about faraway places and edge-of-your-seat adventures.
After graduating from Humboldt State University with a degree in psychology, Kristin realized there is no scarier place than the warped human psyche. Wanting to combine her love of writing with her desire to paint twisted villains, Kristin wound up in the unlikeliest of places—the classroom. She taught high school and middle school English before giving in to the desire to create her own world, where villains can be sympathetic and heroes can be devilishly good.
She is represented by Nalini Akolekar of Spencerhill Associates Ltd. and writes dark paranormal romances and toe curling romantic suspense.

A word with Kristin...

BL: Hi Kristin! We are soooo thrilled to have you here.


Thanks so much for having me on the blog today!

BL: I have really enjoyed "Last Vamp Standing." The story is so much fun and the characters are phenomenal! What was your motivation?
You’re too sweet. My goal was to create a story in a far-away place that was still set in present times. I wanted to take a hero with a blackened soul and pair him with an innocent elder. I wrote every single day, and was determined to finish the book in five months. I met that goal ahead of schedule, and I honestly think the story reads more seamlessly for it.

BL: Dante is one hot vampire! Who or what was his inspiration? Anyone in real life?
There is a little bit of my husband in every hero, though he wouldn’t want me to say that. I don’t write characters based on anyone in particular, but if there’s a certain fight scene and Dante takes charge, kicking ass without fear…yeah, that’s my husband. Honestly, Dante is my favorite kind of hero to read and write. He’s dark to a fault, brash, and protective over the heroine, but what I love most is he’s willing to fight for what (and who) he loves.

BL: Are you a plotter or a write as you go kind of gal?
I’m usually a pantser and fly by the seat of my pants when I write. I have a few key points in mind—usually two turning points and the climax. However, for this book, I had to switch up my usual routine and plot the hell out of it. Since Last Vamp Standing is the third book in the Vampires of Crimson Bay series, there were a lot of carry-over threads that had to be woven into this story. I didn’t want to leave something hanging or not do a character justice.

BL: What do you think is the most important quality for a heroine to have?
Oh, boy. Great question. I think the ability to forgive is a crucial quality for a hero and heroine to have. I spend so much time creating conflict, tying emotions into knots, that if a hero or heroine refuses to budge and gets so hurt that they internalize those feelings into hatred, rage, or resentment, we wouldn’t have a happy ever after. No matter what happens in a story, no matter how much the hero or heroine messes up, love has to conquer all. Whether the hero has to forgive the heroine, or himself (or vice-versa), it doesn’t matter. To reach that ending, the ability to forgive has to play a part.


A word from the Librarian
A wild take on the paranormal, I really enjoyed "Last Vamp Standing."  Besides a super yummy cover, Dante is an amazing hero. As Kristin said, Dante is incredibly protective and deliciously dark. The action is fast paced and I will admit, I do think you would be a tad confused if you haven't read the rest of the series. Not bad confused, but after reading "Last Vamp Standing," you will definitely run out to find the other books. Fun and wonderfully romantic, "Last Vamp Standing" is unlike any other vampire romance I've ever read before. 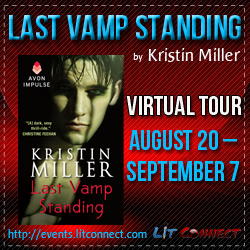 Wanna win a cool prize?
Two random commenters from the entire tour will win their choice of either a Kindle or Nook format eBook of Last Vamp Standing. Please leave a comment along with your broken up email addy.

Contest is open the duration of the tour (August 20 - September 7) and Internationally. Winner will be randomly selected and notified via email.

Additional tour stops can be found at: