With only 48 hours back on home soil for Christmas, United States Army Corporal Saskia Cullen is desperate to spend every minute with her young son. So when heavy snowfall closes JFK airport and she misses her connecting flight, she’s devastated. Until Navy SEAL Luke Gray offers to keep her company… and then personally finds a way to get her home.

Luke is back in the US on leave, waiting to hear the details of his next mission, and Saskia proves to be a pleasant distraction. And when he hears that she needs to get home to see her son, he’s prepared to do anything to help the sexy single mom. Trouble is, he hadn’t planned on falling for anyone, let alone a beautiful soldier about to return overseas.

As a child, Soraya dreamed of becoming an author. Fast forward more than a few years, and Soraya is now living her dream! Working as a freelance writer and now a professional author too, she writes every day and loves her job. Soraya describes being an author as "the best career in the world", and she hopes to be writing romance for many years to come.

Soraya loves spending her days thinking up characters for books, and her home is a constant source of inspiration. She lives with her own real life hero and son on a small farm in New Zealand, surrounded by animals and with an office overlooking a field where their horses graze. For more information about Soraya, her books and her writing life, visit www.sorayalane.com or follow her on twitter @Soraya_Lane. She would love to hear from you.

Website / Facebook
Excerpt
“Luke?”
He raised his eyebrows but didn’t look at her again, the snowflakes suddenly falling with more insistence on the windscreen, making it hard for him to see.
“Shit, hold on.”
She did as she was told, obeying Luke’s command. “How the hell can you see through that?” she asked.
He grimaced. She could see a tightness in his face that hadn’t been there before.
“I can’t, but I need to find somewhere safe to pull over.”
Her heart dropped. They weren’t even half way there and the storm was coming in so bad she was starting to think they could be snowed in for the rest of the day. Or worse.
Luke had slowed the vehicle to a crawl, but now they’d come to a dead stop. He opened his door and jumped out before she could protest, disappearing into the whiteout without a jacket on, before reappearing and leaping back into the truck.
“Luke you must be frozen.” She unbuckled herself and reached out to him, hand hovering before closing over his arm.
Luke stayed still, his body no longer shivering like it had been when he’d stepped back in. She hesitated, stayed still, wondering if she’d done something wrong.
“I don’t think we’ll be going anywhere for a while,” Luke told her, his voice husky and low, turning away only to flick the hazard lights on.
Saskia swallowed then nodded. “Okay.”
They both stayed still, staring at one another. Until Luke reached out a hand, broke the silence and stillness and reached for her, his palm cupping her cheek. “I will get you home, Saskia. No matter what happens, I promise.”
She gulped again, not able to break their gaze, staring into the depths of Luke’s dark chocolate eyes like a spider trapped in its own web. Saskia didn’t answer him, just slowly nodded. He still hadn’t moved his hand, and it was no longer cool, warming up from its connection with her skin.
It seemed like she wasn’t breathing, like she couldn’t have breathed if she tried, as if there wasn’t enough oxygen to even make it possible. Until Luke moved closer to her, his mouth hovering over hers, and suddenly all she could do was suck back short, silent bursts of air.
“Saskia…” As he murmured she leaned closer, couldn’t help herself.
But it was Luke who kissed her. His lips grazed hers so gently, so carefully, that she thought she’d imagined it. She reached her hands up, cupped his face with one, mirrored his action, and clutched at his shoulder with the other. A shiver licked its way down her spine, made her lean closer into him, and Luke didn’t need any further encouragement.
“Hey,” he suddenly said, pulling back slightly and looking down at her.
Saskia knew she was blushing – her face was burning. “Hey,” she whispered back.
They stared at one another again, like they had before. Not saying a word, but Saskia’s mind was racing. Was she actually doing this? Making out with a guy she’d known for less than 24 hours, and ready to rip her clothes off it meant staying close to him?
“We might be stuck here for awhile,” he said, voice low as he glanced out the window. They were surrounded by white. “Maybe quite a while.”
Luke cleared his throat, but Saskia didn’t miss what he was trying to hide. His eyes flickered past her, only for a second, but not fast enough for her not to keep up.
She glanced over her shoulder, made certain there was nothing else there, that he was actually thinking what she was. That he was struggling to look at her for the same reasons she was struggling to look at him.
Luke’s eyes said it all. They were inquisitive, mesmerizing… hungry. And her fingers were itching to touch his face again, her lips tingling, ready to be covered with his.
She was having that problem with not enough air again. Because she wasn’t this kind of girl. She’d never had a one-night stand, never done anything reckless with a man before, never done anything risqué in her personal life. Not ever.
Screw it.
Saskia flicked her tongue over her lips, nervously moistening them, before closing the distance between Luke’s body and hers. She leaned in closer, kissed him full on the mouth, and pushed back his shoulders as she landed in his lap, straddling him.
She’d flown halfway across the world for a 48 hour trip home, and she was damned if she was going to waste it. She might not be able to make it to where she was supposed to be going, but she sure as hell could make it a trip stuck in the snow that she’d never forget.


My Thoughts
A wonderful Christmas story that is equal parts romance, sweetness, and pure aww moments, Navy Seal's Promise definitely delivers! Luke and Saskia are both military and off for a few days for Christmas. Saskia is trying to make it home to her son and poor Luke doesn't have anyone to go home to. What else should happen than for Luke to move heaven and earth to get Saskia home, even through a snow storm? One of the reviewers on Goodreads said the only bad thing about this story was never wanting it to end, and I'd have to agree. Sweet, with great characters and a wonderful premise, I'd recommend Navy Seal's Promise to anyone with an hour or so to spend in this wonderful world that Soraya Lane has created. AND look at that cover, YUMMO! :) 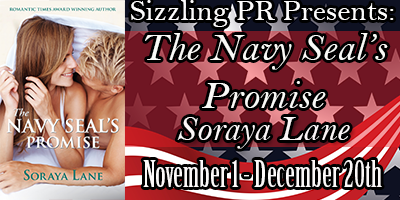