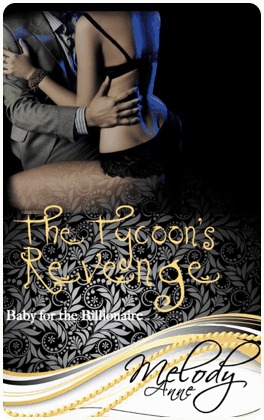 The Tycoon’s Revenge
By: Melody Anne

Jasmine Freeman’s world is about to tumble down around her and the one responsible for it is none other than her first love, Derek Titan. She hasn't seen him in ten years, and they are both going to learn the truth of what happened back then.

Jasmine grew up wealthy and oblivious to the destruction her father caused all around him. Derek was from the wrong side of the tracks. In ten years their lives will be reversed. He is now a multi-billionaire tycoon and she works hard, but barely gets by due to her father’s unethical business practices.

Derek comes seeking revenge and instead finds out he has a half grown son and the woman he's been angry with for so many years is not who he thought she was. They both fight against the passion they still feel for each other, but in the end it is irresistible.

My Thoughts
Having just finished this book, my thoughts are still a little jumbled, but I am overwhelmed by just a sense of disappointment. There was a lot of potential here and it just never came together for me.
Jasmine and David have known one another for years. Following a failed marriage attempt, the two have separated and went there own ways. Nearly a decade later, fate brings the two back together with David buying the company were Jasmine works.
There was a lot of conflict in this book, so the author had a ton to work with. A secret baby (Jasmine was pregnant when she left David, gasp!), daddy issues, David’s millionaire status, faded love, and a whole lot more. But it never took off and I felt like the book was half finished. Issues weren't dealt with, or when they were it was finished in like two paragraphs when it could have taken pages. I hardly ever complain about a book being too short, but this one most definitely was. To add to the whole half finished idea, I never felt like I knew Jasmine or Derek well enough, even though I read an entire book about the two.
This one just never worked for me. I think its a trilogy but I’m not even interested in the slightest. I wanted to like this one but...I never did.