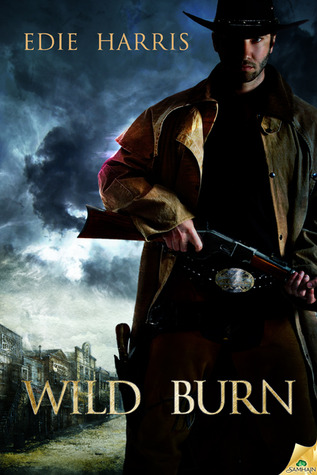 Infamy weighs heavy on Delaney Crawford’s broad shoulders, first as a supposed Confederate turncoat, then as a relentless hunter of Cheyenne dog soldiers. Summoned to the small mining community of Red Creek, the exhausted, embittered Del is doing what he does best—ridding the town of its savage scourge—when one of his bullets misses the mark.

Ex-nun Moira Tully has been working with John White Horse for months to integrate a band of peaceful Cheyenne with the local townsfolk. Now he’s hurt, and she’s been caught in the crossfire. There’s only one man to blame for her simmering anger and the inexplicable attraction that tilts her heart on its axis. Del.

When Del is forced to acknowledge the truth that the Cheyenne are no threat, his task just gets more complicated: fighting a wild attraction that catches flame at the most inconvenient times, and figuring out the treacherous motives behind his hiring.

But the most heart-wrenching challenge could be overcoming sordid pasts that won’t stay in the past—pasts that threaten to bury all hope of happily ever after.

My Thoughts
Wild Burn is such an interesting mix of romance and adventure in the Wild West. Pairing a Confederate soldier hunting Cheyenne soldiers with an ex-nun from the East was a gamble that ultimately paid off.
Moira Tully is an ex-nun living in Colorado teaching the children in the small town. She is attempting to create a rapport with the local Indian tribe. One day as she is out walking, she is actually shot, well zinged really, by Del. Del has been brought to the town by the Sheriff to deal with a supposed hostile Indian problem. He has served in the Confederate Army and now travels the midwest, dealing with such problems.
I think the thing I liked most about the novel was the actual characters. Moira was so stubborn yet intelligent, I started seeing a little of myself in her. I loved how rambunctuious she was and absolutely unafraid to state her opinions. Del was a straight-talking, strong ex-soldier trying to find his way in the world.

“I dream about you every night. It's torture."
"Why torture?"
"Because I wake up knowing I didn't actually touch you.”

As far as the story itself, I found myself getting a bit bored during different portions. It was slow in parts and it was hard to keep my interest level up. The same story could have been told in half the number of pages. An ok story with well-written characters, I think Wild Burn is part of a new series, so I’m interested to see what comes next.