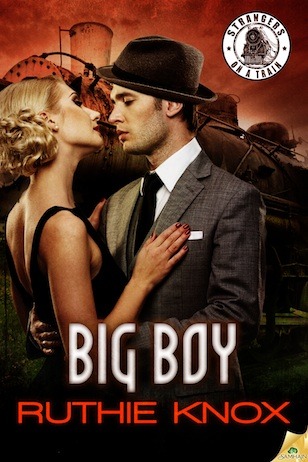 A Strangers on a Train story

Meet me at the train museum after dark. Dress for 1957.

When Mandy joins an online dating service, she keeps her expectations low. All she wants is a distraction from the drudgery of single parenthood and full-time work. But the invitation she receives from a handsome man who won’t share his real name promises an adventure—and a chance to pretend she’s someone else for a few hours.
She doesn’t want romance to complicate her life, but Mandy’s monthly role-playing dates with her stranger on a train—each to a different time period—become the erotic escape she desperately needs. And a soul connection she never expected.
Yet when she tries to draw her lover out of the shadows, Mandy has a fight on her hands…to convince him there’s a place for their fantasy love in the light of day.
Warning: Contains sexy role-playing, theatrical application of coal dust, and a hero who can rock a pair of brown polyester pants.

My Thoughts
It’s official, I am a huge fan of Ruthie. She takes characters, a crazy setting, and creates absolute magic. Two people role playing on a train doesn't sound like a fun premise for a romance novella, but it was utterly fantastic.
Amanda is a single parent who works as a professor at the University of Green Bay. Her sister has recently passed away, leaving her in charge of her infant son, instantly turning Amanda into a Mother. Stressed out between caring for a baby she hadn't planned for and trying to keep her career afloat, Amanda has little time in her life for romance. So when she sees Tyler on a dating website, she decides she needs to make a little time in her life for fun.
Tyler tries to escape from real life by role playing with the sexy professor. Once a month they meet at a train museum and pretend to be people they aren't, both trying to hide from their real lives. In reality, Tyler works part-time while trying to care for his father throughout his development of dementia. Pretending to be someone he isn't for a few hours a week with Mandy is his way of escaping from the world and pushing away his problems.
I think what appealed to me about this story the most was how real it was. Amanda and Tyler both were dealing with tough situations and want to escape for a while. They are so scared to reveal the real details in their life, which I think to some extent, we all do in some form. No one has a same situation and sometimes its nice to just pretend your someone else for a while.
Another hit out of the ballpark for Ruthie, Big Boy takes two people, adds a little mystery and creates a delightful realistic romance. At under 100 pages, you won’t even notice its a novella you've had such a ride. A great addition to the Stranger on a Train series, it works well with the other novellas included in the anthology. Well done Ms. Knox, I can’t wait to see what you come up with next!