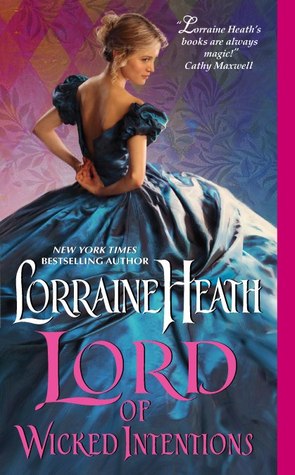 My Thoughts
I have loved the Lost Lord of Pembrook series from Lorraine Heath this past year. She started strongly with a wonderful back story of three young lordlings having to make their way in the world because of a despicable Uncle, and I can confidently say she finished strongly with the youngest and possibly the most sensitive brother, Rafe.
Rafe was left behind more than a decade before when his Uncle seized the Dukedom from his father. The three boys deciding it would be best to separate and come together later when they were older, smarter and stronger. While his older brothers went into the military and on a ship, Rafe was left behind in a work house in truly appalling conditions. Never forgetting nor forgiving his brothers in adulthood.
Rafe meets Evelyn (Eve) as her brother is trying to sell her off to be a mistress. She doesn’t understand this at all and thinks her brother is simply trying to arrange a good marriage for her. She’s quite surprised really when she is delivered to Rafe’s home and his intentions, while better than the others, are not quite honorable. Raised as an illegitimate daughter of a lord, Evelyn is lost and abandoned when her father dies leaving her in the hands of her despicable older brother.
I really enjoyed both Rafe and Evelyn. Rafe wanted a normal life so bad, but events from his past seemingly prohibit him. When he brings Eve into his house, he’s surprised about how she affects him. She has a way different outlook on life, while having had a difficult past herself, she hasn’t let those events shadow her future. At times I wanted to yell at her perceived naivete, I think it helped highlight how different Rafe and she truly were and how far apart their worlds were located.
Beyond having highly complex characters, the plot moved quickly. As I was reading I was surprised to find myself more than halfway through when it felt like I had just started. Lord of Wicked Intentions was an excellent finale to the series. Each book was strong in its own right and i loved how each brother had a distinct attitude and weren’t just cookie cutters. Can’t wait to see what comes next from Lorraine Heath!