My Thoughts
Kristen Ashley rocks my socks. Yep. I said it. I love almost every word she’s ever written and Jagged wasn’t any different for me. Taking me right back into one of my favorite series and straight into the Colorado Mountains, Ham Reece and Zara Cinders may be two of my favorite Ashley characters to date. Confident Ham (crazy character name, I know right) and insecure but strong Zara have a rocky start but quite the adventure when they finally find love with one another.     Ham and Zara have been together before, years ago and before Zara was married. Not ready to commit, Ham leaves Zara and moves away not able to see her be with someone who isn’t him. After the events involving a serial killer in the previous book, Breathe, Ham returns to Zara ready to do what it takes to reunite.
In the time Ham was gone, Zara forced herself to move on. Marrying, then her subsequent divorce, a great business run into the ground and finally reluctantly returning to her old job of waitressing, life hasn't’ been easy nor fair to Zara in the passing years. The attraction to Ham is still there but can she trust him to stick and stay when she needs him or will he just leave again?
Ham was an amazing hero and most definitely swoonworthy. He knows what he wants and isn’t afraid to do what he has to. He understands Zara has been hurt in the past and slowly tries to find his way back to her, in a way that is forever. I know I’m waxing poetic, but I loved it so stinkin’ much! Zara drove me crazy sometimes, she seemed indecisive or insecure, but it completely fits within the character. She’s had a rough past and wouldn’t move on with a skip and a wink, even if it was super hot Ham that she was skipping with.
All in all, Jagged is yet another fantastic story from Kristen. A lovely story about two people finding one another after heartbreak and healing hurts. Super sexy, fast paced, and great characters come together to create an instant classic for Ashley fans. I will warn you though, if you haven’t read the rest of the series, certain aspects of the story may be a bit confusing. 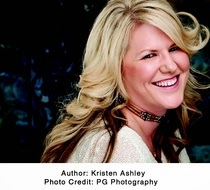 Kristen Ashley grew up in Brownsburg, Indiana, and has lived in Denver, Colorado, and the West Country of England. Thus she has been blessed to have friends and family around the globe. Her posse is loopy (to say the least) but loopy is good when you want to write.

Kristen was raised in a house with a large and multigenerational family. They lived on a very small farm in a small town in the heartland, and Kristen grew up listening to the strains of Glenn Miller, The Everly Brothers, REO Speedwagon, and Whitesnake.

Needless to say, growing up in a house full of music and love was a good way to grow up. And as she keeps growing up, it keeps getting better.