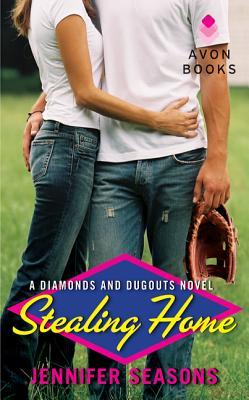 
Love may be just a game, but the baseball players in Jennifer Seasons' sexy diamonds and dugouts series— they're playing for keeps!

Mark Cutter has it all: a lucrative baseball career, fast cars, and faster women—and all thanks to his priceless good luck charm. At least, that's what he thinks before Lorelei Littleton shows up. Next thing he knows, he's waking up alone, the sexy brunette has vanished, and his good luck charm is gone. More than a little curious about the wicked-hot cat burglar and determined to get his property back, Mark's going to track down the thief and make her pay—big time.

Maybe Lorelei feels a tiny bit guilty for stealing Mark's good luck charm, but when it's worth $100,000 and the money could save her niece's life? She's not losing sleep over it . . . but him? Lorelei can't get the ballplayer with the bad attitude out of her head. And now he's come after her with more than just revenge in his eyes. Lorelei has a choice: turn over the charm and lose the money, or keep it and risk losing everything . . . including her heart.

My Thoughts
When I was thinking of ways to describe Stealing Home, one thought kept going through my head...this book is just plain fun. I had actually read the second book  Playing the Field, first, and I enjoyed it so much I came back to pick this one up. A great book for an afternoon read, filled with fantastic characters, a hot romance and a feel good ending.
Mark Cutter is one the biggest baseball players in the sport today. He has the money, he has the women, he has the fame. It isn’t until a woman he meets in a bar steals his lucky charm that he actually even begins to question that life may not be as wonderful as he thinks it is.
Enter the mysterious woman who stole said lucky charm - Lorelei. Desperate to get her niece the surgery she needs, Lorelei finds a way to get the money; by stealing hot shot Mark’s lucky charm and giving it to his evil ex-wife. It isn’t until she gets to know Mark that she realizes the robbery may not be as easy as she once thought. As she slowly falls in love with Mark, Lorelei finds herself with conflicting feelings of right and wrong and realizes things may not be as black and white as she once thought.
This book sounds kind of convoluted but it really isn't. Lorelei needs that money and even though she sounds like a bad person, you the reader love her. She’s kind of like a Robin Hood, trying to save her family. If she has to steal from the rich, so be it. Mark is kind of a dumb jock but evolved throughout the romance to become the man Lorelei needed.
The Diamonds and Dugouts Series is easily going to become a favorite of many romance readers. Filled with laugh out loud moments and solid characters, you find yourself drawn into the story and emotionally connected to the characters. A great read for a summer afternoon, be sure to checkout the sequel, Playing the Field with the same great characters and amazing chemistry!