"Fighting For You" By: Sydney Landon Review 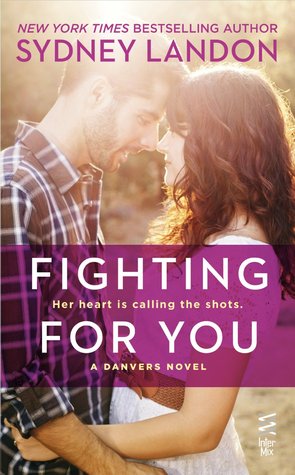 Fighting for You
By: Sydney Landon
Synopsis


Ella Webber has spent years uncomfortable around the opposite sex... But as soon as she meets handsome Declan Stone, she is smitten. Quickly they become friends, finding frequent reasons to see each other around the office, and Ella longs for even more. So-with a little help from her friends-Ella resorts to performing a little seduction. One that Declan will never be able to resist.

My Thoughts
Being a huge fan of this series as a whole, I was highly anticipating Declan and Ella’s story. I can’t even tell you how excited I was...and how disappointed I am in what I just read. This is my first DNF I’ve had for quite a while and I am so sad it was Sydney’s book.
Ella and Declan’s romance has been hinted at in all of the previous books. We all wanted big bad Declan to fall hard for the shy, simple Ella. So its safe to say there was plenty of buildup and as a reader, I wanted that buildup to pay off. I’m sorry to say, it never did for me.
I’ve relatively enjoyed the other books in the series, especially Fall For Me but this one was blah. I made it about 50% of the way through and decided there were so many more books out there that I set it down. All in all, a blah book. Blah :)