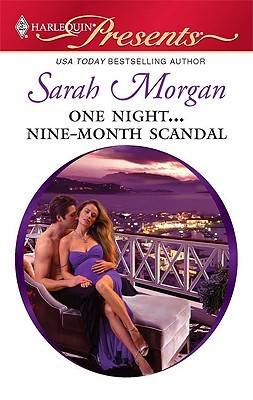 A sleek Ferrari in the sleepy English village of Little Molting was always going to create a stir—but for schoolteacher Kelly it only means one thing. Her ex, Alekos Zagorakis, has stormed back into her life the way he left it: completely on his own terms.
Four years ago Kelly stood, bridal bouquet in hand, realizing that her gorgeous groom wasn't walking down the aisle to meet her. Now he's come back to claim what's rightfully his—and that includes one night with Kelly….
But it's a night that has lasting consequences!


My Thoughts
Kelly was left at the altar by the love of her life, Alekos years before. Having thought she moved on, she decides to sell her engagement ring on eBay. Imagine her surprise when Alekos shows up ready to claim the ring...and her! Only a few months after their initial meeting again, Kelly finds out she’s pregnant and reaches out to Alekos.
This is my first Sarah Morgan book and it will likely be my last.  I know that sounds incredibly negative and I honestly don't mean for it to be. I just felt a huge disconnect between myself and the characters.  Kelly seemed like such a pushover and not realistic at all. Would she really be wearing around a ring of the man who left her years and years before? Would you she immediately sleep with him when she saw him for the first time...in years after everything he put her through? Again, I just had a hard time connecting with the character and her motivations behind her actions. I didn’t care for Alekos AT ALL...he seemed arrogant, self centered, and just blase about the whole situation. I wanted a little redemption after what he had done, but I never got what I wanted.
Book Details
Publisher: Mills & Boon
Date of Publication: July 16, 2010
# of Pages: 192
ISBN: 9780263878257
Location: Greece
Posted by The Brunette Librarian at 1:30 AM

Email ThisBlogThis!Share to TwitterShare to FacebookShare to Pinterest
Labels: **, 2015, 2015 Where Are You Reading, Library Review