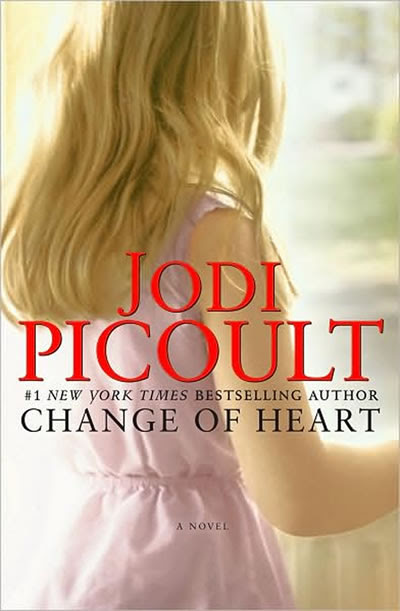 Today's review is of an older novel,
"Change of Heart" By: Jodi Picoult

Can we save ourselves, or do we rely on others to do it? Is what we believe always the truth? One moment June Nealon was happily looking forward to years full of laughter and adventure with her family, and the next, she was staring into a future that was as empty as her heart. Now her life is a waiting game. Waiting for time to heal her wounds, waiting for justice. In short, waiting for a miracle to happen. For Shay Bourne, life holds no more surprises. The world has given him nothing, and he has nothing to offer the world. In a heartbeat, though, something happens that changes everything for him. Now, he has one last chance for salvation, and it lies with June's eleven-year-old daughter, Claire. But between Shay and Claire stretches an ocean of bitter regrets, past crimes, and the rage of a mother who has lost her child. Would you give up your vengeance against someone you hate if it meant saving someone you love? Would you want your dreams to come true if it meant granting your enemy's dying wish?

My Thoughts:
So essentially this is only the second Jodi Picoult book I have read. I previously read her Amish story and thought it was ok. I had a long trip to Illinois and I picked up the audio book. I got through 3 CD's of the audio book before I could pick up the book and boy was I glad I did. As with most Picoult's book, each chapter is told from the point of view of someone different.
I really liked this book. The story starts out with June Nealon telling her story. She had opened up her home to a man named Shay Bourne and within a few months, Shay had killed both her daughter and her husband in a double homicide one night. This part of the story is truly heartbreaking and I honestly teared up and she described her daughter's death. June is pregnant when her family is taken from her and later gives birth to a daughter named Claire. Claire has a heart defect and needs a heart transplant to live to adulthood...and her sister's killer, Shay Bourne, wants to give it to her.
The story then skates forward to one of the jurors named "Michael." He is a juror in Shay's trial and votes for Shay to receive the death penalty for his crime. After the trial, Michael decides to become a priest. Later in the story, Michael becomes the spiritual advisor to Shay without telling him he had been on his jury.
One of Shay's fellow inmates, Lucious, is the main person who witnesses "Shay's miracles." He lives in the cell next to Shay and witnesses him turning water to wine, resuscitating a dead bird, and other miracles. Lucious is in prison for killing his lover whom he had caught with another man. He suffers from AIDS and Shay seems to cure Lucious from his illness through his miracles.
The final main character who tells the story is Maggie, an ACLU lawyer who takes Shay's case. Shay doesn't wish to postpone his execution or even to have his sentence converted...he just wants to be able to give his heart to Claire, June's daughter. Maggie was my favorite character. She was a strong lawyer but you could feel her distaste of fighting to end one's life.
It was an exquisitely written book that has it all. Religious themes, a little mystery, a little romance, and great relationships between characters makes this a creative story that will keep you up reading all night. Wonderful story with a twist at the end, when I finished I was smiling. I hope it makes you smile too. 4 Stars out of Five!

Check out the following blogs for other reviews of "Change of Heart":
-Simply Books
-Read or Eat
-Old Fashioned Reader

Posted by The Brunette Librarian at 11:14 AM