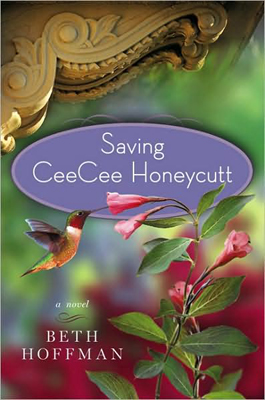 Today's selection is another one of my book club selections,
"Saving CeeCee Honeycutt" By: Beth Hoffman
Synopsis from bn.com:

Twelve-year-old CeeCee Honeycutt is in trouble. For years, she has been the caretaker of her psychotic mother, Camille-the tiara-toting, lipstick-smeared laughingstock of an entire town-a woman trapped in her long-ago moment of glory as the 1951 Vidalia Onion Queen. But when Camille is hit by a truck and killed, CeeCee is left to fend for herself. To the rescue comes her previously unknown great-aunt, Tootie Caldwell.In her vintage Packard convertible, Tootie whisks CeeCee away to Savannah's perfumed world of prosperity and Southern eccentricity, a world that seems to be run entirely by women. From the exotic Miz Thelma Rae Goodpepper, who bathes in her backyard bathtub and uses garden slugs as her secret weapons, to Tootie's all-knowing housekeeper, Oletta Jones, to Violene Hobbs, who entertains a local police officer in her canary-yellow peignoir, the women of Gaston Street keep CeeCee entertained and enthralled for an entire summer.


I cannot tell you how great this book is. Definitely one of my favorite books in a long, long time. I know other people have said it, but its just a sweet, feel good book that will leave you smiling when you finish.
CeeCee is living a hard life as an early teen. Her mother is suffering from a severe mental illness. CeeCee’s Mom is known to dress in prom dresses too tight and flirting with young men. It would embarrass CeeCEe to death. As you are reading, you can feel CeeCee’s embarrassment which is a given conclusion for a child this age. In this relationship, CeeCee is the adult. Her father is almost nonexistent. He is embarrassed of his wife and doesn’t want to admit that she needs help. He is off  most of the time and in the end it was revealed he had a girlfriend in another town. All the more reason for CeeCee’s mother to live in her dream world.
I don’t’ want to ruin it but something happens to CeeCee’s Mother and she passes away unexpectedly. A great Aunt shows up (Aunt Tootie) to pick up CeeCee and take her home. Initially she is reluctant, but when faced with living with her father, finally comes to accept this as a better option. The pain CeeCee feels at her mother’s death is immense and as a reader it almost paralyzes you. It's so incredibly sad and realistic.

The story is fabulous, but the language of the novel will sweep you away. The first time I noticed how vivid the imagery was started on page 41. It begins with a conversation between Mrs. Odell (CeeCee's much beloved neighbor) and CeeCee...
"Life is full of change honey. That's how we learn and grow. When we're born, the Good Lord gives each of us a Life Book. Chapter by chapter, we live and learn."
"But, Mrs. Odell, I've never heard of a Life Book."
"It's not a book you can see or touch. It's a book that's held deep within your heart. It's guarded by your spirit."
"My spirit?"
"Yes," she said, smoothing a loose strand of hair from my face. "When a chapter of your Life Book is complete, your spirit knows it's time to turn the page so a new chapter can begin. Even when you're scared or think you're not ready, your spirit knows you are."

This is my second most favorite part of the book. Beth Hoffman's imagery is astounding, it's honestly like you are there. As I read the following passage, all I could think was how awesome the image she was describing was and how well I could picture it.
I turned to see a face embroidered with a web of deep lines peek out from behind the sunflowers. A threadbare ankle-length slip hung loosely from her thin frame, and tossed over her shoulders was a blue plaid lumberjack shirt, at least four sizes too big. I wondered  what it was she had on her head, and when she took a few steps forward, I realized it was a pink plastic shower cap. Why she was wearing a pink shower cap on a hot summer's day I couldn't imagine, but, in all truthfulness, I have to say it suited her. In her hand was a crooked walking stick, and crouched by her feet was a gray tabby cat with a wide scar across his nose.
Gorgeous isn't it? Simply gorgeous. This book is a work of art and one of my favorites in a long while. 4 Star out of 5.
Posted by The Brunette Librarian at 9:29 PM