"Once Upon a Winter's Eve" By: Tessa Dare Review 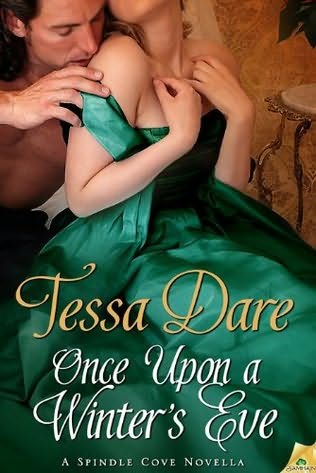 "Once Upon a Winter's Eve"
By: Tessa Dare
Synopsis from Amazon:


Violet Winterbottom is a quiet girl. She speaks six languages, but seldom raises her voice. She endured bitter heartbreak in perfect silence. The gentlemen aren't beating down her door.
Until the night of the Spindle Cove Christmas ball, when a mysterious stranger crashes into the ballroom and collapses at Violet's feet. His coarse attire and near-criminal good looks would put any sensible young lady on her guard. He's wet, chilled, bleeding, and speaking in an unfamiliar tongue.
Only Violet understands him. And she knows he's not what he seems.
She has one night to draw forth the secrets of this dangerously handsome rogue. Is he a smuggler? A fugitive? An enemy spy? She needs answers by sunrise, but her captive would rather seduce than confess. To learn his secrets, Violet must reveal hers—and open herself to adventure, passion, and the unthinkable... Love.

My Thoughts:
A short story by Tessa Dare, "Once Upon a Winter's Eve" tells the story of Violet Winterbottom, a wallflower spending some time in fictional Spindle Cove. This is the second story of Dare's Spindle Cover series. She has come to this tiny town in a bit of disgrace, trying to get past the "big disappointment," a failed romance with the boy next door.
The story begins as Violet is at a ball standing with her friends. Suddenly a man barges in, covered in blood, speaking french and falls at her feet. As they rush him to a room to help him, Violet thinks she may recognize this insensible scoundrel. As the story advances, this french speaking dirty madman turns out to be the big disappointment himself, the man who left her after a night of passion.
This is a fast paced romance, and I will admit, I haven't read the first story in the series titled, "A Night to Surrender." There were parts in the story that seemed a little too fast, if you know what I mean. I may have enjoyed it more if I had read the first novel but it was a cute romance none the less. The hero and the heroine seemed to genuinely care for one another. The secondary characters also made the novella enjoyable. I am looking forward to reading the rest of the series.

Book Details
Publisher: Samhain
Date of Publication: November 15, 2011
# of Pages: 233
Posted by The Brunette Librarian at 7:00 AM