Waiting on Wednesday - "The Husband Hunt" 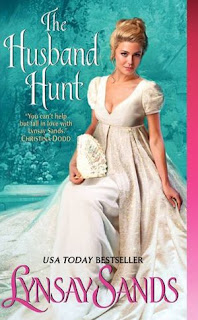 Lisa Madison wants a husband, and she has just the candidate in mind: Robert Langley. Trouble is, the infuriating man insists on seeing her as the impish girl she once was—even as every other gentleman in London has taken notice of her womanly…charms. When her beauty lands her in danger, it’s Robert who comes to the rescue…only to announce his affections are not of the romantic variety!

Robert saw enough sorrow in his parents’ union to know he wants nothing to do with marriage, which is exactly what he’ll be trapped into if he acts on his desire for the irksome siren. And then Lisa does what Robert least expects: gives up on him! As feigned indifference gives way, blistering passion burns at last. But just before the pair can give in to hard-won bliss, an enemy with unfinished business lurks threatening to destroy them both.

Posted by The Brunette Librarian at 4:00 AM