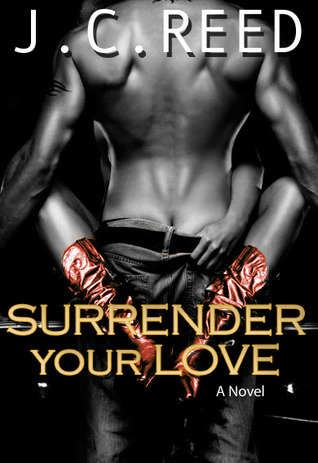 Surrender Your Love
By: J.C. Reed

Meeting Jett was like lightning. Dangerous. Better left untouched. And better forgotten. But lightning always strikes twice.
Brooke Stewart, a realtor in New York, doesn’t do relationships. When she’s sent to a remote estate to finalize a real estate deal, she discovers her new boss is no other than the guy she left naked in bed.
Sexy, dangerously handsome, and arrogant Jett Mayfield attracts trouble, and women, like a lightning rod. But the night he meets Brooke he gets more than he bargained for. The green-eyed millionaire playboy isn’t used to taking no for an answer, and he isn’t about to start now.
When he proposes two months of no strings sex, Brooke is intrigued and accepts his proposal. Little does she know Jett’s determined to claim the one woman he can’t have, pulling her deeper into his dangerous world.
A man who doesn't take 'no' for an answer.
A woman afraid to surrender to love.
Two lives that are about to cross...and secrets laid bare.

My Thoughts
Soooo, I liked this book but I’m gonna warn you. The author is planning on having this become a series so the entire story doesn’t end with this story. Its pretty good and I’ll admit, when I realized at the end of the story it was ending with a cliffhanger, I let out a little umph of disbelief. Regardless, I’m looking forward to the world that is being created and the romance blooming between Jett and Brooke.
Brooke first meets Jett, a millionaire real estate developer, after a case of mistaken identity. At first thinking he was someone else, she doesn’t put her best foot forward as is the case. When Brooke returns to her job, she is unceremoniously fired and miraculously, the company that Jett works for hires her!
So it sounds very meet cute I know, but its so much more than that. Jett has such a conflicted history and you just ache for him. Brooke, coming off of a bad relationship to begin with, finds herself in a relationship with her boss (Jett) and she doesn’t know if that is a good or a bad thing. There is a pull but near the end, a shocker reveals a little known fact, that puts into question everything they knew about one another.
J.C. Reed is a fantastic new author who can definitely write confusion and conflicts. Brooke is your atypical twenty something, trying to get by but not using mommy’s money to do so. She’s working hard and when Jett gets in her way, she has to decide whats important in life. Love or her career; and can the two ever meet? Be prepared for the ending though, its gonna leave you wanting and counting the days until the sequel!

Note: Conquer Your Love, the sequel will be coming out June 1st!