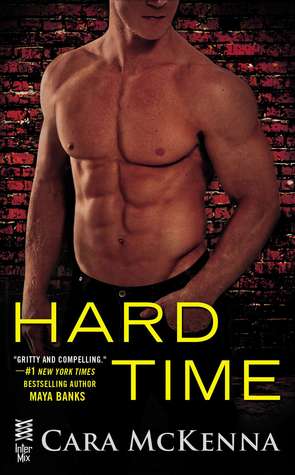 
Annie Goodhouse doesn’t need to be warned about bad boys; good sense and an abusive ex have given her plenty of reasons to play it safe. But when she steps into her new role as outreach librarian for Cousins Correctional Facility, no amount of good sense can keep her mind—or eyes—off inmate Eric Collier.

Eric doesn’t claim to be innocent of the crime that landed him in prison. In fact, he’d do it again if that’s what it took to keep his family safe. Loyalty and force are what he knows. But meeting Annie makes him want to know more.

When Eric begins courting Annie through letters, they embark on a reckless, secret romance—a forbidden fantasy that neither imagines could ever be real…until early parole for Eric changes everything, and forces them both to face a past they can’t forget, and a desire they can’t deny.

Annie is a small town librarian with an interesting job. Having been hired for Outreach services, Annie is expected to spend one day a week at the local prison reading to them while also teaching skills they can use on the outside. At first nervous, her nerves are really shaken when she locks eyes with Eric Collier, an inmate convicted of assault.
Eric begins writing letters to Annie, romantic and heartfelt. Knowing there couldn’t be anything between them while he was locked up, Eric spills his heart to Annie each week. Telling her of his dreams and wishes, every week the letters get a little more deeper and a bit sexier. Annie becomes entranced by Eric and his letters carry her through the week. It isn’t until he is released for good behavior and actually a part of her community that she comes to terms with Eric as a man, and not just an inmate on the inside.
Sweet and heartfelt, McKenna does an absolutely fantastic job of writing the insecurities inmates have and those who love them. Dealing with the isolation, the uncertainty, and the dire need for contact with the outside world, Eric is on rocky ground...both with himself and in his life outside of the walls. I loved the uncertainty of their relationship when Eric was released too, how each would react to the sudden change in dynamics.
This is my only complaint, and while minor, I think I should address. I absolutely hated the ending. HATED IT. I’m sure the author had reasons for doing what she did, but to me it felt abrupt and there really didn’t seem to be a climax to the story at all. I loved it and was waiting for something to happen and then suddenly, the book was done. As you're reading it, you feel the build up and think something major will happen with one of the characters. So when it doesn’t, it kind of seems to be a bit of a let down.
That aside though, Hard Time is an extremely sweet love story between two people kicked around in life. Striving to better their circumstances, both Annie and Eric grab life by the horns and decide to give their relationship everything they can. The letter writing was a genius way to grow their relationship while also being realistic to the circumstances surrounding them. The sensuality that McKenna puts into their time away from the prison...wowzas. Very well done if you know what I mean.


I would suggest Cara McKenna’s
After Hours as a great read after reading Hard Time.