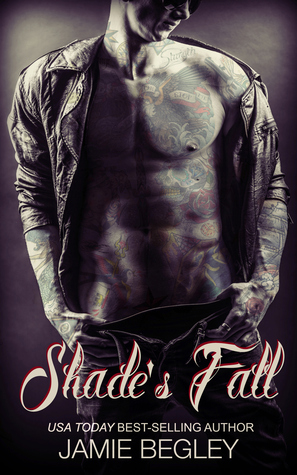 Shade is everything Lily doesn't want in a man. He's rude, obnoxious and he's definitely not a cowboy. The tattooed enforcer for The Last Riders is a mystery Lily doesn't want to solve. He's too much for her to handle, especially with the nightmares from her past constantly threatening her sanity.

Lily is everything Shade wants in a woman. She's sweet, kind and submissive. When she discovers the truth about The Last Riders, it threatens to tear apart every relationship within the club. Her rebellion causes the predatory instincts to rise in the ex Navy SEAL sniper.

When The Last Riders are threatened by another motorcycle club just as determined to claim Lily, Shade is her only hope of surviving the approaching confrontation. Could their passion be Shade's downfall?


My Thoughts
Lily hasn’t had the easiest life. Adopted at a young age by incredibly strict parents, forced to forget her past and raised in a religious zealot’s home, the only real light in her life is her sister Beth. When Beth married a motorcycle club member Razer, Lily’s life was flipped upside down and hasn’t necessarily settled yet.
Shade first saw Lily when Razer met his wife Beth. Knowing she was too young for any sort of relationship, Shade has bided his time and watched from afar. Yet as life and circumstances seem to have Lily falling farther and farther into a black hole, Shade finds himself the only one that can break into her psyche. At first Lily is appalled at the lifestyle the bikers, their blatant disregard for privacy and their openness with one another. However, as she gets to know the people within the club, she realizes she has never been more wrong in her life.
I had enjoyed the Last Riders Series but have been looking forward to Shade and Lily’s story from the very beginning. I was worried I may have been building the story up in my head but was happy to realize that I was worried for nothing. Longer than I remember her other novels being, Begley takes her time and really tells the story that needs to be told.
Lily had seemed like such an injured kitten in the previous books. She still seems like an injured soul, don’t get me wrong, but the background is finally explained. A horrific history and an especially horrible early childhood has created this manic young woman who honestly doesn't know who she is.
A well developed romance, Shade and Lily’s road to romance is rocky but ultimately completely satisfying. At times I found Shade’s behavior overbearing and a bit hard to believe, but I think within the context of the story Begley was trying to tell it worked. A well rounded, very sensual romance that is easily my favorite of the series so far.