Books I read this week:

Half-human and half-wyr, Pia Giovanni spent her life keeping a low profile among the wyrkind and avoiding the continuing conflict between them and their Dark Fae enemies. But after being blackmailed into stealing a coin from the hoard of a dragon, Pia finds herself targeted by one of the most powerful–and passionate—of the Elder Races.


As the most feared and respected of the wyrkind, Dragos Cuelebre cannot believe someone had the audacity to steal from him, much less succeed. And when he catches the thief, Dragos spares her life, claiming her as his own to further explore the desire they’ve ignited in one another.


He’s a wyr warrior, a god of storms. She’s the heir to the Dark Fae throne. But desire will bring both to their knees in this all-new Novel of the Elder Races.


During the rule of her murderous Dark Fae uncle, Thistle “Tricks” Periwinkle found sanctuary among the wyr in New York. Her ethereal beauty and sparkling personality won the hearts of the public, but after her uncle’s death, there are those who don’t want to see her ascend to the throne…


Able to wield thunder and lightning, wyr sentinel Tiago Black Eagle has ruled the skies for centuries. His massive build and thunderous power make him one of the wyr’s best weapons. And he’s sent to protect Tricks when she’s almost assassinated in Chicago.
Soon, both Tiago and Tricks will fall prey to the stormy hunger that engulfs them—a passion that will shake the very foundation of all the worlds…

"The Diary"
By: Eileen Goudge

When the two grown daughters of Elizabeth Marshall discover an old diary of their mother’s in her attic, it comes as a shock to learn that the true love of Elizabeth’s life was not their father. This is the mystery the two daughters must unravel as they stay up late reading the words penned by Elizabeth so long ago. Their mother can’t give them the answers: After a massive stroke, she lies mute and near death in a nursing home. Only the pages of her diary can provide clues to what really happened.

In a richly detailed journey into the past, we see Elizabeth lose her heart to one man while remaining devoted to another. Finally, she must choose between the stable, loyal Bob...and the electrifying and unpredictable A.J., who spent time in juvenile detention as a teen. When a suspicious fire in the neighborhood is linked to A.J., Elizabeth is faced with another dilemma: She’s the only one who can clear A.J.’s name, but to do so would ruin her reputation. Surprisingly, it’s Bob who comes to the rescue, forcing Elizabeth to make perhaps the most painful decision of her life....

The Diary is a love story. It’s also the story of the unshakable bond between a mother and her daughters. 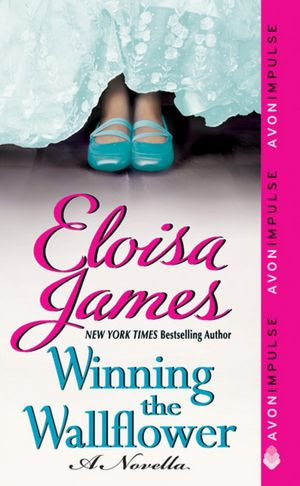 "Winning the Wallflower"
By: Eloisa James


Lady Lucy Towerton
Plain and tall. (According to the lady herself.)


Titled, and irreproachably proper. (According to her fiancé.)


Until, overnight, she becomes


Heiress. (Thanks to an aged aunt’s bequest.)


Belle of the Ball. (So say the fortune hunters of the ton.)

In charge of her own destiny (finally!), Lucy breaks her engagement and makes up her mind to never be proper again...

"The Duke is Mine"
By: Eloisa James


Tarquin, the powerful Duke of Sconce, knows perfectly well that the decorous and fashionably slender Georgiana Lytton will make him a proper duchess. So why can’t he stop thinking about her twin sister, the curvy, headstrong, and altogether unconventional Olivia? Not only is Olivia betrothed to another man, but their improper, albeit intoxicating, flirtation makes herunsuitability all the more clear.

Determined to make a perfect match, he methodically cuts Olivia from his thoughts, allowing logic and duty to triumph over passion…Until, in his darkest hour, Tarquin begins to question whether perfection has anything to do with love.

To win Olivia's hand he would have to give up all the beliefs he holds most dear, and surrender heart, body and soul…

Unless it’s already too late.

When Devil, the most infamous member of the Cynster family, is caught in a compromising position with plucky governess Honoria Wetherby, he astonishes the entire town by offering his hand in marriage. No one dreamed this scandalous rake would ever take a bride. And as society mamas swooned at the loss of England′s most eligible bachelor, Devil′s infamous Cynster cousins began to place wagers on the wedding date.

But Honoria wasn′t about to bend society′s demands and marry a man "just" because they′d been found together virtually unchaperoned. No, she craved adventure, and while solving the murder of a young Cynster cousin fit the bill for a while, she decided that once the crime was solved she′d go off to see the world. But the scalding heat of her unsated desire for Devil soon had Honoria craving a very different sort of excitement. Could her passion for Devil cause her to embrace the enchanting peril of a lifelong adventure of the heart?
Posted by The Brunette Librarian at 9:52 PM