"His Mistress By Christmas"
By: Victoria Alexander
For three years, Lady Veronica Smithson has been perfectly happy as a widow — and thoroughly independent. Still, the right gentleman could provide the benefits of marriage without the tedious restrictions. And in Sir Sebastian Hadley-Attwater, renowned explorer and rogue, Veronica is sure she has found him. Sebastian will come into his inheritance in a matter of weeks — if his family deems him responsible enough. There’s no better way to prove his maturity than with a home and a wife. But though the lovely Veronica will share his bed, she steadfastly refuses to marry. However, Sebastian has a plan. An intimate sojourn at his new country house will surely change Veronica’s mind. For Sebastian never takes no for an answer. And even in the midst of mischief-making relatives and unexpected complications, he intends to persuade his Christmas mistress that they belong together — in this, and every season to come... 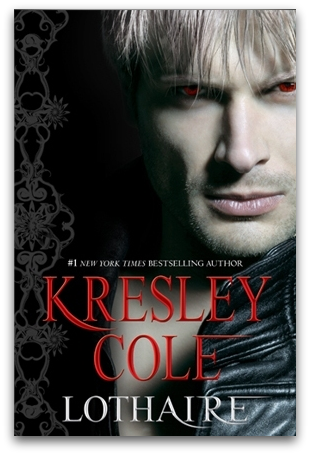 Driven by his insatiable need for revenge, Lothaire, the Lore’s most ruthless vampire, plots to seize the Horde’s crown. But bloodlust and torture have left him on the brink of madness— until he finds Elizabeth Peirce, the key to his victory. He captures the unique young mortal, intending to offer up her very soul in exchange for power, yet Elizabeth soothes his tormented mind and awakens within him emotions Lothaire believed he could no longer experience.
Growing up in desperate poverty, Ellie Peirce yearned for a better life, never imagining she’d be convicted of murder—or that an evil immortal would abduct her from death row. But Lothaire is no savior, as he himself plans to sacrifice Ellie in one month’s time. And yet the vampire seems to ache for her touch, showering her with wealth and sexual pleasure. In a bid to save her soul, Ellie surrenders her body to the wicked vampire, while vowing to protect her heart.
Elizabeth tempts Lothaire beyond reason, as only his fated mate could. As the month draws to a close, he must choose between a millennia old blood vendetta and his irresistible prisoner. Will Lothaire succumb to the miseries of his past . . . or risk everything for a future with her?

"Once Upon a Winter's Eve"
By: Tessa Dare 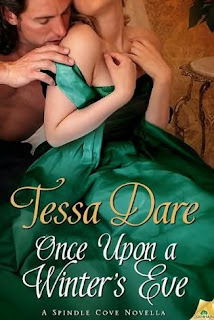 Violet Winterbottom is a quiet girl. She speaks six languages, but seldom raises her voice. She endured bitter heartbreak in perfect silence. The gentlemen aren't beating down her door.
Until the night of the Spindle Cove Christmas ball, when a mysterious stranger crashes into the ballroom and collapses at Violet's feet. His coarse attire and near-criminal good looks would put any sensible young lady on her guard. He's wet, chilled, bleeding, and speaking in an unfamiliar tongue.
Only Violet understands him. And she knows he's not what he seems.
She has one night to draw forth the secrets of this dangerously handsome rogue. Is he a smuggler? A fugitive? An enemy spy? She needs answers by sunrise, but her captive would rather seduce than confess. To learn his secrets, Violet must reveal hers—and open herself to adventure, passion, and the unthinkable... Love.

When in a rush of uncommon bravado high school senior Piper offers to manage Dumb, her school's most popular student rock band, her family thinks it must be a joke. A retiring student and member of the chess team, Piper is neither the stereotypical band manager nor a typical teen: she is profoundly hearing impaired. After she discovers that her parents have spent the majority of her college money to treat her infant sister's deafness with cochlear implants, Piper's quest to get Dumb a paying gig leads her to consider her managerial role as a potential source of income. John's novel is written with a reverence for popular music–particularly the work of Jimi Hendrix and Kurt Cobain–and a respect for its ambitious teen characters. Although Piper's hearing is a characterizing detail that could have been used solely to add a type of politically incorrect and screwball humor to the story, her abilities are seen as assets: while lip reading allows her access to public conversation, she is not above using sign language to obscure her intentions.

Posted by The Brunette Librarian at 10:42 PM