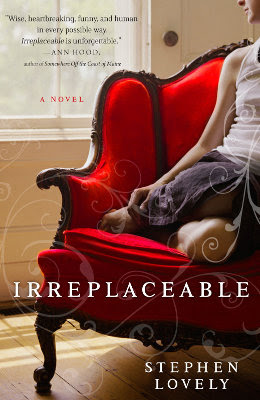 Synopsis:
When 30-year-old archaeologist Alex Voormann’s bright, ambitious wife, Isabel, is killed in a bicycle accident, he is faced with a momentous decision. She had filled out a donor card, and the hospital staff are requesting his permission to take her heart for a woman who would die without a transplant. Even a full year after he signed off on the procedure, Alex is still conflicted about the decision, so when Janet Corcoran, the mother of two whose life Isabel saved, contacts him, he becomes angry. Her gratefulness reminds him all over again of his grievous loss, and he can’t help but feel resentful that her good fortune came at his expense; meanwhile, his mother-in-law has a totally different reaction, believing that her daughter’s generous spirit lives on in Janet.

My Thoughts:
"Irreplaceable" is Stephen Lovely's first novel, so I was pretty excited to read this debut novel. It was a book chosen by my book group and I was intrigued by the concept. I didn't know much about organ donation and have never really read much about the topic. While ultimately I think the novel had promise, the characters were weak and I was never able to get into the novel completely.
Alex's wife, Isabel, is killed within the first chapter of the book. The novel really revolves around her death and how it affects the the world. If we were going to categorize a main character, it would probably be Alex. He is dealing with the death of his wife and feels somewhat  responsible for her heart even after her death. In the middle of this husband drama, we have Isabel’s Mother, the heart recipient Janet and the man actually responsible for Isabel’s death, Jasper.

I think the first thing that jumped out of my mind after reading this book was, I just don’t care about the characters. Sure they’ve had this horrible thing happen to them and it was horrendous, yet they seemed so whiny to me. I understand this terrible thing happened and it will take time to get through the problems, but I felt the conveyance of grief through the characters was a bit misrepresented.
This book had a pretty interesting set up but just didn’t deliver for me. A few of the people who are in my book group have pretty similar feelings so I doubt  I would recommend this book to anyone. It had promise but just didn’t deliver, at least for me.
Book Details
Publisher: Voice
Date of Publication: February 3, 2009
# of Pages: 352
ISBN: 1401322824
Posted by The Brunette Librarian at 10:00 AM