Welcome to the Brunette Librarian

I am so excited to be hosting the
"Shrouded in Darkness" Blog Tour! 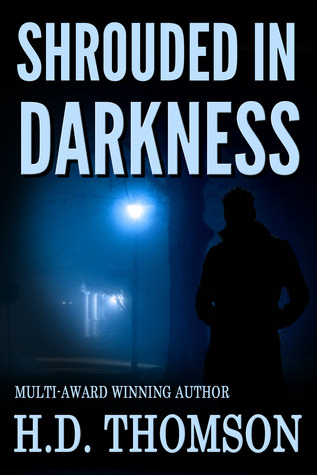 Jake Preston is on borrowed time. If he doesn’t stumble upon a miracle and soon, he’ll end up dead. And even if he does, he still might end up dead with a clever killer hounding his heels. He believes that the one miracle and antidote to save him is in Margot Davenport’s house, across the country and miles away from Boston. Somewhere locked in her home is the key to reversing an experiment that is killing him.
Margot doesn’t particularly care if she ends up dead. She’s lost everything she’s ever cared for. A divorce and the loss of her job as a corporate lawyer has left her with little faith in herself or in anyone else. Most importantly, she’s lost the one person on this earth she’s looked up to and cherished–her brother, Johnny. His death in a car accident has devastated her, and she can’t find the willpower to pull herself from the chasm she’s fallen into. Her only solace is at the bottom of a wineglass. Having moved back to the small town in northern Arizona where she was raised, she’s made a point of isolating herself both mentally and physically from everyone other than a few chosen friends. Little does she know that her life is going to explode into chaos.

That Wild Brunette's Thoughts:
Wow! Where do I start? It's no secret that I am a fan of paranormal romance. I love the beginnings of series. So to read the beginning of a new paranormal romance series, I was incredibly excited. A promising start to the "Shrouded" series, I was pleasantly surprised by this new to me author.
Margot (Don't you just love that name?) is a down on her luck, divorcee, who has just lost her brother when Jake shows up on her doorstep. He seems to know a whole lot about her, but she knows very little about him. Jake claims to know her brother, which Margot doubts, until he shows her a necklace formerly belonging to her brother.
Jake is on the run. He used to work with Margot's brother and believes he knows who and why Margot's brother was killed. In the meantime, he is dealing with a super secret problem that is directly connected with Margot's brother and ex-husband. Got all that? It's pretty convoluted, but easily followed, trust me.
So the things I enjoyed - 1. Super Evil Villain 2. Complex Plot 3. Interesting Hero that isn't the cookie cutter hottie 4. Different take on the genre 5. Interesting new world building 6. Wonderful, deep romance
While the story was interesting, there were a few problems for me. At points the book seemed to drag for me. I also enjoy my romances to move a little more quickly, but that's totally my own feeling.
All in all I would recommend this book to fans of the genre or people who are interested in something a little different. This isn't your standard paranormal, no werewolves or vampire teeth, yet its still pretty dang fun. Interested in trying out an aspiring new author?? You can find it at Amazon AND Barnes & Noble!

About the Author: H.D. Thomson

H.D. Thomson moved from Ontario, Canada as a teenager to the heat of Arizona where she graduated from the University of Arizona with a B.S.in Business Administration with a major in accounting. After working in the corporate world as an accountant, H.D. changed her focus to one of her passions-books. She owned and operated an online bookstore for several years and then started the company, Bella Media Management. The company specializes in web sites, video trailers, ebook conversion and promotional resources for authors and small businesses. When she is not heading her company, she is following her first love-writing.
Website / Facebook / Twitter


Margot Davenport should never have opened the front door. She should have just kept on getting slowly and thoroughly drunk that night. But the pounding on the door went on and on, reverberating throughout the house and inside her skull.  Stumbling from the couch in the living room, Margot knocked over her glass and an empty wine bottle, and grabbed onto her throbbing head with a hand.
“Damn it!”
In the hall, she tripped over her calico cat, Marmaduke, who streaked past her and up the stairs. She swore again. The banging continued. The crazy fool outside had given up on the doorbell long ago.
“John!  Come on.  Open up!  It’s me, Jake!”
At the mention of Johnny’s name, Margot’s stomach twisted and rolled with sudden nausea. “Okay! Okay! Give me a second.”
She groped for the light switch to the hall. Nothing happened.
“Damn, stupid thing!” That’s what she got for not replacing the house’s ancient wiring.
“John, I’m freezing my ass off!”
“What do you expect,” Margot muttered, wondering if this guy was playing some sick joke at her expense.
Margot hit the outside light switch and peered through the glass panel beside the door. A man stood on the front porch. She didn’t recognize him, but then again, the sheet of snow and the light’s glare against the night backdrop didn’t help matters.
A gun or pepper spray for protection sounded pretty nice right now, but Margot hated guns and had never expected the need, living on the outskirts of Greyson, Arizona. It wasn’t like this town up in the White Mountains was loaded with crime. The worst incident had been a case of disorderly conduct last winter, and that had been from a drunken tourist.
“Who is it?”
A pause on the other side followed—almost as if she’d surprised him.
“Margot? Is that you? It’s Jake Preston.”
Though muffled, his words were clear enough to make out. The name sounded familiar, but she couldn’t recall what Johnny had said about him.
Margot frowned and winced as pain cut across her temple, brow and the base of her skull. She should have stopped at one glass of wine. “How do you know Johnny?”
“I worked with him at Miltronics for several years on the outskirts of Boston.”
Margot debated about turning this Jake away as she watched him stamp his feet against the porch. He must be freezing—what with the wind and snow.
“I know it’s late, but I need to talk to John. Please. If you could just get him, you’ll see I’m harmless.”
The urgency in his voice made her decide. He obviously didn’t know about her brother. She sighed heavily. What she had to tell him wasn’t going to be easy.
Margot unlatched the lock and opened the door.
An angry gust of wind burst into the house, tearing the knob from her grasp. The door flew wide and crashed against the wall. Gasping, she reeled back as snow flew in, stabbing her face with icy spikes.
“Here, let me.” He stepped inside and shoved the door closed with his shoulder. He turned his back against the light from the kitchen, casting his face in shadow. His baseball cap further shielded his features—along with sunglasses of all things.
How very odd. Sudden apprehension curled up her spine as Margot stepped away from Jake and the doorway. Topping a good six-feet, he appeared far larger than when he’d stood behind a locked door.
“What are the sunglasses for?” she asked.
“The light.”
“What?”
“My eyes. They’re sensitive to light. I injured both corneas as a child.”
“Oh.” She must have been staring at him like an idiot, but something about him made her uneasy. And it wasn’t just the glasses and pale complexion.
He must have sensed her disquiet, because he explained further, “It’s called traumatic iritis. It’s something I’ve had to live with for as long as I can remember.” He shrugged a large canvas backpack from his shoulder and placed it on the floor. “Can you get John for me?”
“He’s dead.”
Margot never intended the words to come out so abrupt and final, but...it hurt. Balling her hands into fists, she fought against the sudden tears that burned the back of her eyes. Please no. Not now. She couldn’t fall apart in front of this stranger.
“He can’t be. That’s impossible.” 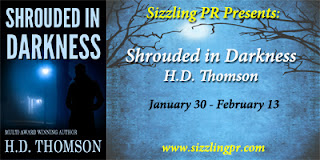 Posted by The Brunette Librarian at 12:00 AM