"The Devil of Jedburgh" By: Claire Robyns Review 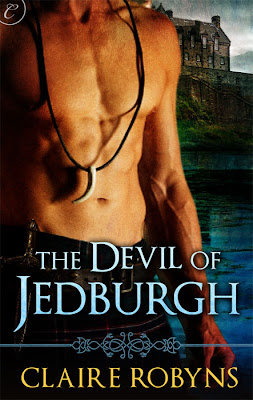 "The Devil of Jedburgh"
By: Claire Robyns

Raised on rumours of The Devil of Jedburgh, Breghan McAllen doesn't want an arranged marriage to the beast. The arrogant border laird is not the romantic, sophisticated husband Breghan dreams of—despite the heat he stirs within her.
In need of an heir, Arran has finally agreed to take a wife, but when he sees Breghan's fragile beauty, he's furious. He will not risk the life of another maiden by getting her with child. Lust prompts him to offer a compromise: necessary precautions, and handfasting for a year and a day, after which Breghan will be free. For a chance to control her own future,      Breghan makes a deal with the Devil.
Passion quickly turns to love, but Arran still has no intention of keeping the lass, or making her a mother. He loves her too much to lose her. But when a treasonous plot threatens queen and country, Breghan has to prove only she is woman enough to stand by his side.


Breghan McAllen is a 19 year old Scottish girl promised in marriage to the Devil of Jedburgh, a laird known for his brutality and viciousness. Arron, said Devil, decides he needs an heir and its high time he got married. He chooses Breghan because her mother had several children without problems, and he feels its time to cement his legacy.
Bree and Arron are immediately at odds upon meeting. She's heard all of these rumors about him and he is pretty much wanting a brood mare. I know I'm not making it sound all that interesting, but it really is a cute story about first impressions and how we perceive one another.
The characters are immature and both allow assumptions to consume their relationship. That was my biggest pet peeve. It was a sweet story when they were finding themselves, but I really disliked how assumptions about one another restricted the story.
The romance was really cute though. I enjoyed Bree's interactions with the world around her, it was interesting to to see her view of the world. Arron, although kind of frustrating at times, really wanted what was best for her. And, perhaps the best part, the ending made me smile and sigh. Definitely for a romance fan, I think this book will appeal to those who like the Beauty and the Beast tales and of course, have love of things Scottish!


I received this title from NetGalley for review.