Book Blurb & Review with Giveaway -- "Laying Down the Law" By: Delilah Devlin

"Laying Down the Law"
By: Delilah Devlin

The TripleHorn Brand, Book 1
A lifetime ago, Zuri Prescott kicked the dirt off her boots and ditched her small-time small town for the glam city life—and lived to regret it. When she’s framed for a bank job, she lights out for home, seeking refuge with her old high school sweetheart while she figures out her next steps. Only she discovers that the boy she left behind is the last man she should trust.

Sheriff Colt Triplehorn knows trouble when he sees it, especially when it comes in the form of a familiar trespasser, caught naked between an angry bull and her underwear. Sure she’s up to her usual no good, he grants her sanctuary at his ranch—the better to keep an eye on her, and purge her from his system once and for all.

Reconnection is sweet and hot, but the heat can’t hide the truth. When Colt inevitably finds out what Zuri’s running from, it’s too late to put the fire out, and he’s got a career-compromising choice on his hands. Follow the letter of the law, or follow his heart.

Product Warnings: When a sheriff captures the girl who got away, expect revenge so hot it leaves brands on two lonely hearts…


My Thoughts
** I want to apologize to Ms. Devlin for not getting my review up on time. First our electricity went out and then as soon as I got to work I began to get sick, which ended up in a trip to the doctor, a shot, prescription medications and sleeping 20 hours. As soon as I woke up this morning, I jumped up and realized that I hadn't updated the blog post and for that, I deeply apologize!**

Devlin has done it again! I pretty much gobble up anything she writes and “Laying Down the Law” is another hit. Zuri is caught up in a bank robbery and ultimately is framed for something she didn’t do. What else can she do really but go back to her small hometown and to the only person she has truly loved?
Colt Triplehorn is surprised to find Zuri back and can’t help himself when he decides to be her protector. His family is against the idea and feels he should leave well enough alone, but he goes against their advice and brings Zuri back to his home and his life.
I think the magic in Delilah’s character’s are in their simplicity. You feel like you know Zuri, know her motivations and understand why she does the things she does. it creates a likeability factor and you root for the couple throughout the whole story. Plus, Delilah writes in such a hot way the pages almost burn your fingers. Fun and fast, “Laying down the Law” is great for fans of western romances or someone looking for that great next “hot” read! Desperately waiting for the next in this series, I can't wait to know what happens to Colt's hot brothers!


She’d landed on her knees, her pantyhose shredding on impact—the long, fat ladder that rippled up her thigh as strangely upsetting as the masked man behind her who grabbed her by the hair and pulled her up to face the security alarm.

She’d pressed the buttons on the key pad, disarming the premises alarm and dropped her hands. But another nudge of hard steel against her back, and his hushed, “The vault alarm too, sweetheart,” had her punching a second set of numbers before he hustled her around the corner toward the vault, out of sight of her manager who waited in the parking lot for the all-clear signal.

The vault operated on a timer. At any other time of day, she wouldn’t have been able to open it—a fact that didn’t register until later. She’d spun the two combination locks, heard the inner mechanisms clang as they released, and he’d reached around her to grab the lever and push it down. The large steel door swung open.

The thief had shoved her through the anteroom with security deposit boxes lining both walls, heading straight for the locked door at the rear. Again, he’d waited while she found the key and opened the door, then shoved the mesh interior gate inward.

Forcing her to her knees, he’d wrapped her wrists and ankles in duct tape, and pulled a hood over her head.

Then she’d been left to shiver on the floor, listening to the sounds he made as she followed him in her mind through the gate while he scooped stacks of cash into a bag. One side only. Later, the assistant manager pointed out that the thief must have been timing himself, a real pro, because he’d skipped the temptation of pausing to finish the sweep.

Less than five minutes had passed since they’d entered. Another two and the manager would call the police.

Giveaway Details
Delilah will be awarding a $20 Amazon Gift Card to a randomly drawn commenter during the tour.
Leave a comment with your e-mail to be entered! 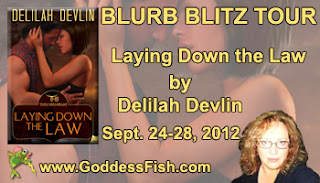