Today we are featuring
"Willow Pond"
By: Carol Tibaldi 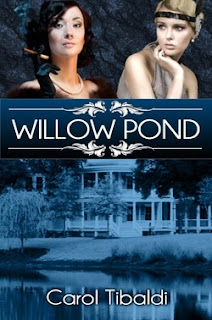 The Roaring Twenties crumble into the Great Depression, but Virginia Kingsley, New York's toughest and most successful speakeasy owner, is doing just fine. Now that the world is falling apart, bootlegging is a flourishing business, and she's queen of that castle.

Then her infant nephew is kidnapped. Her niece, Laura, and Laura's philandering movie star husband, are devastated. The police have few leads, and speculation and rumors abound in the media circus that follows the celebrity abduction.

Little Todd's absence shapes everyone's lives. When he is finally found, the discovery will bring disaster for some and revelation for others.

About the Author
Carol Tibaldi was born and raised in Bayside, New York and attended Queens College of the City University of New York. She loves to travel and has lived in London and Los Angeles. For twenty five years she worked as a newspaper reporter and covered the crime beat. She is a history buff and loves to research different time periods having a special affinity of the prohibition era and the Civil War. Willow Pond is her first novel and she is hard at work on the sequel.

What I Thought
"Willow Pond" takes place during the roaring 1920's, a time in our history that I think is totally unrepresented. The clothes, prohibition, gangsters, the music and simply the culture combine to create a romantic and mysterious novel in New York. Beyond totally loving the era, the story was suspenseful filled with interesting quirky characters.
"Willow Pond" is an extraordinary story about how people deal with conflict and uncertainty. Laura's son is kidnapped, and while she is beside herself with worry; the child's father Peter could pretty much care less. Not knowing who to turn to or who is behind the despicable deed, Laura has to find her son and specifically who took him.
Laura is a strong character, filled with moxy and strength. Some of the people she surrounds herself with will want to make you tear your hair out, but on the whole its an interesting mix. By far though, I just loved the atmosphere. The language, the clothes and just the plain history of it swept me away. Definitely check this one out if your looking for an interesting novel set in the 20s filled with suspense and a happily ever after.

Wanna win a copy??
I'm lucky enough to be able to giveaway
TWO copies of "Willow Pond"
Just leave a comment with your e-mail and your entered!
Winners will be selected Sunday, September 16th at 12pm