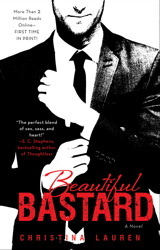 
An ambitious intern. A perfectionist executive. And a whole lot of name calling. Discover the story that garnered more than two million reads online.

Whip-smart, hardworking, and on her way to an MBA, Chloe Mills has only one problem: her boss, Bennett Ryan. He’s exacting, blunt, inconsiderate—and completely irresistible. A Beautiful Bastard.

Bennett has returned to Chicago from France to take a vital role in his family’s massive media business. He never expected that the assistant who’d been helping him from abroad was the gorgeous, innocently provocative—completely infuriating—creature he now has to see every day. Despite the rumors, he’s never been one for a workplace hookup. But Chloe’s so tempting he’s willing to bend the rules—or outright smash them—if it means he can have her. All over the office.

As their appetites for one another increase to a breaking point, Bennett and Chloe must decide exactly what they’re willing to lose in order to win each other.

My Thoughts
I’m gonna admit this first off - the entire reason I picked this book was absolutely because of the terrible reviews on Goodreads. People were saying it was the worst book of all time, the characters were terrible, the dialogue atrocious and tons of other not to nice things. Totally fine, we all have those books we looove to hate. So, what did I do but go and request it from Edelweiss in order to see just how terrible it was. Only, it wasn’t.
I’m not going to say this is wonderful literary fiction because it isn’t. However, I was a little shocked at how negative the reviews were when I found myself kind of liking both Bennett and Chloe. It’s not realistic in the least and if people acted this way in real life I’d be calling the cops, but otherwise I found it pretty entertaining.
Chloe is working as an intern for Bennett’s company. He is an executive and she is his assistant. Its a trope used since the romance genre began, but it works. There is a delicious give and take in this book that I found fascinating that frustrated other readers. She hates him, he thinks she’s a shrew, yet they are explosive together.
Each chapter is written from a different perspective - one from Bennett and the next chapter from Chloe. I think it gave the story a good balance and I enjoyed seeing each character’s perspective. Bennett was so overwhelming at times and could be so overbearing, I found myself just hating him. Yet, I liked seeing Chloe bring him to his knees so to speak.
It felt very Fifty Shades of Grey to me, which I’m sure was the author’s intention. Originally published on the Internet under the name The Office, Beautiful Bastard is another piece of fan fiction for Twilight. Nothing makes me madder than when people talk badly about fan fiction. I don’t read fan fiction but I have a great respect for it. Sure there is crap out there, but there is crap writing everywhere. Its ok to not enjoy a book but I hate it when people want to get grumpy because it began as fan fiction. As I read this story, I was not assaulted with ideas of Twilight (which I HATED) and I thought it was a pretty good piece of fiction.
Beautiful Bastard does have its annoying points. Bennett can be completely overbearing and frankly, if he behaved that way in my world I’d be callin’ the cops for harassment. But I think part of the fun is letting yourself fall into that world of make believe and fantasy. I wouldn’t behave that way but I kind of liked the thought once in a while, you know?
I guess what I’m trying to say, I liked the book. Bennett and Chloe were unique and I enjoyed falling into the fantasy that was there world. I am definitely planning on reading the sequel Beautiful Stranger. Unique in its tone, I think the authors will find success in the post Fifty world.

#1 for the 2013 New Adult Reading Challenge
Posted by The Brunette Librarian at 2:00 AM