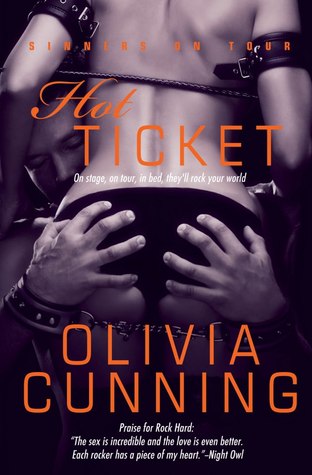 There are things in bassist Jace Seymour’s past that he is unwilling to share with anyone. To cover his guilt and anguish, he seeks dominatrix Mistress V (Aggie) to temporarily placate his inner turmoil. Aggie doesn’t have much use for men–besides the power rush she gets when they’re begging for mercy at her feet–but Jace isn’t like her usual clients. His cool defiance and unexpected dominance in the bedroom drives her to distraction and quickly steals her heart. When circumstances threaten Jace’s position in Sinners, Aggie must help him regain his rightful place in the band while showing him that time and love can heal all wounds

My Thoughts
Finally! I think my favorite rockers are back after that fiasco that was Trey’s book. This book actually comes third in the series, despite being released fourth. Hot Ticket tells the story of Jace, the bass guitarist and most quiet member of the band and Aggie, the badass chick he gives his heart to.
Little has been known about Jace in the previous books. He’s quiet, standoffish and in Rock Hard we see his initial introduction to Aggie. Many of the events in the story happen concurrently with the previous book, so its a good idea to have at least read Rock Hard  to understand what is happening in the background and why the characters are behaving the way they are.
Aggie is a pretty rad girl. She works as a dominatrix, which I was a little unsure of to begin with, but it totally works with the book. Jace has tremendous guilt over his past, specifically about relationships with his parents. He feels he has to be punished, has to be hurt but Aggie sees beyond that. She sees the uncertain young boy beneath this tough facade.
I think its important to mention again that this is actually the third book in the series yet was released fourth. I really wish the publisher hadn’t made this decision and had actually released the books in series order. It greatly diminished my enjoyment of the series but I think Ms. Cunning has been redeemed! I was instantly transported to the events of book two and had no problem going back.
Aggie and Jace worked really well together. Both a bit broken, both a bit shattered, as their relationship grows they heal one another in ways they never thought possible. I thought the characters were well written and the pace moved well. My favorite though is the band! I love revisiting old characters and finding out what’s happening with Brian, Sed, Trey and Eric. All in all a well rounded addition to the series that I enjoyed ever so much!


I received this book from Edelweiss in exchange for an honest review.