"Kiss of a Demon King" By: Kresley Cole Review 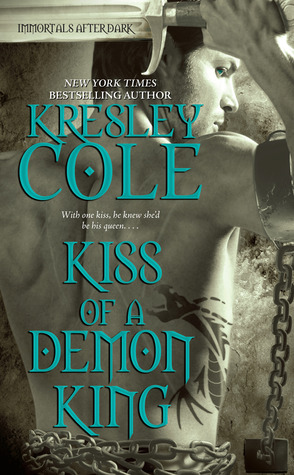 
HIS OBSESSION...
Sabine, Sorceress of Illusions: the evil beauty who surrenders her body, but not her heart.

HER DOWNFALL...
Rydstrom Woede: the ruthless warrior who vows to keep her at all costs.

THEY WERE NEVER SUPPOSED TO WANT EACH OTHER THIS MUCH...
With each smoldering encounter, their shared hunger only increases. If they can defeat the sinister enemy that stands between them, will Sabine make the ultimate sacrifice for her demon? Or will the proud king lay down his crown and arms to save his sorceress?

I have professed my love of Kresley Cole books before and I’ve gotta say again, even on rereading Kiss of a Demon King still stacks up as amazing!! The world Cole creates is so intricate and the pieces fit together so tightly that it just takes you to another realm of reading. The romance is exquisite and the characters are just so funny and fierce, I can’t even get over it.
Rydstrom is a King that has been deposed by Sabine’s brother. King of a demon realm, Rydstrom has spent thousands of years gathering troops and weapons as he prepares to go up against Sabine’s “undying” brother. Sabine hates her brother and is secretly plotting against him. To fulfill a prophecy, Sabine’s brother sends her to kidnap and romance Rydstrom to create a baby...so as I’m writing this I realize this is kind of confusing but I promise its not in the least. Well a bit, but not much.
Rydstrom is strong willed, a King, and has lived on his own planning a take over for much of his life.      Being kidnapped by Sabine and held under her will understandably doesn’t go well. Recognizing Sabine as his fateful mate, when he finally escapes he decides to take Sabine with him.
Both Rydstrom and Sabine are crafty and smart. Tortured beyond reason by circumstances beyond their control, each has lived through terrible things and have emerged stronger for it. One of my favorite scenes is when Sabine tries to leave Rydstrom and finds herself unable to. Their need for one another is just so heart wrenching.


He found her not even a block away from the house, sitting on a curb.

As he approached, he saw her wiping her face with her forearm. Sabine was...crying? "What are you doing out here, cwena?" Over the past week, Rydstrom had been pleased when she'd worried about him, and gratified when she'd felt the sting of jealousy. Was he a terrible man to hope she was crying about him?

She glared at him with her bottom lip quivering, allowing him to see her like this instead of using a mask. "I d-don't have anywhere else to g-go." Another swipe of her forearm over her eyes. "Lanthe's gone, and I c-can't get to her for six days. And I'm in a strange t-town and land, and Vrekeners are everywhere."

Sabine hadn't even mentioned what they'd just gone through-

"And you br-broke up with me!" she said, her tears falling faster. "Is that supposed to make me happy?"

He swooped her up in his arms. "Will you shut up?" With his free hand, he brushed her tears. "I made it ten minutes before I came after you.”

And to finish everything that is good, Nix is out in full force in this one. You never know where she’ll show up or what she’ll say but its always worth it.


“You two. You can do a cleaning spell."

The witch shook her fist to the sky, crying, "Damn you, Valkyrie! Damn you and your digital ways!”

I love, love, love this book. Rydstrom and Sabine are some of my favorite characters from the series and I’m thrilled with their story. Anxiously awaiting Lanthe (Sabine’s sister) and her story, which I’m hoping will be told soon. Keep up the amazingness Ms. Cole!