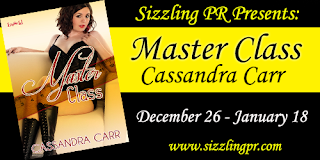 Ryan and Lisette explore each other and the lifestyle, but what started out as playtime quickly evolves into something more. The problem? Ryan isn’t ready to get serious again and Lisette doesn’t want to fall in love with a guy who can’t give all of himself to her. Both of them are going to have to break out of the bonds holding them back from happiness.

What I thought...
Wow!! Cassandra Carr outdid herself with this one and I'm not saying that lightly. The characters, the setting, the romance were all simply perfect. Ryan and Lisette are both broken people trying to piece together their lives and find themselves. Coincidentally, most of this "finding" takes place in a new BDSM relationship between the two of them. I think the thing I liked most about this book was the romance that went with it. The characters weren't just in this world, they actually cared for one another and a real relationship developed. Unique and different from other titles in this genre, I fell in love with Ryan completely and totally. I just finished this so I'm still on a bit of a book high, but it is sooo stinkin' good! Fans of Fifty Shades, Sylvia Day books, or really just looking for a great romance will like Cassandra Carr's newest title. Fabulous!
Posted by The Brunette Librarian at 6:00 AM