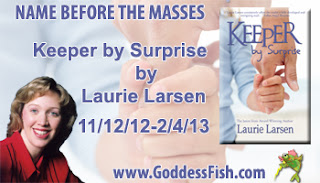 Keeper By Surprise
By: Laurie Larsen

Life changes forever for Keith Hanson when his parents’ will declares him guardian over his three younger siblings. His new responsibilities are challenging, but he’s even less prepared to fall in love with Lisa Carle, a social worker with a devastating secret.

Laurie Larsen is the EPIC Award-winning author of Preacher Man, Best Spiritual Romance of 2010. To date, she has published seven books in the romance and women’s fiction genres, including one Young Adult romance. Keeper by Surprise is her latest release. She lives in the Midwest with a strenuous day job, a husband of more than two decades, two amazing sons and Gracie the Wonder Dog. To keep up with Laurie and her books, visit her at www.authorlaurielarsen.com, on Twitter or Facebook.

“Hi, is there something I could do for you?”

Boy, was that a loaded question. To Lisa’s dismay, the mere sound of his voice caused a double-shot of female hormones to take a dive into her groin. It was deep and gravely, but polite. A touch innocent. She’d love to let his voice lap over her like ocean waves for hours at a time. She cleared her throat and attempted, probably failing miserably, a cool nonchalance. “Oh, don’t let me interrupt you. I’m here on business.” She commenced her determined trek to the front door.

He took a few steps toward her, then stopped. “I’m sorry? Who is it exactly that you’re looking for?”

She looked at him over her shoulder. He was gazing intently at her, his head cocked slightly to one side. “Uh,” she started, forgetting her name for a moment under the intense stare of those gorgeous … green! … eyes. Who would’ve figured him for green eyes?

He tore his gaze away from her and started looking around. He backed up a few steps to a piece of white fabric lying nearby in the lawn. He picked it up and Lisa saw it was a shirt. He slipped it on effortlessly, while she mourned the sudden and quite unexpected loss of her view of that spectacular chest.

He approached her then and continued his curious inspection of her. Lisa cleared her throat. God, she had to pull it together here. She was working, and she needed to continue to function, even in the presence of this hunk. “I’m here to see Keith. Keith Hanson.”

To her surprise, he smiled, his face lighting for a moment, like a lamp would brighten a dark room. “I’m Keith Hanson.”

My Thoughts
I think what surprised me most about Keeper by Surprise was the originality of the romance. Sure it has the boy meets girl, boy likes girl stuff, but its premise and secondary characters were so original and different that I found myself engulfed in the world quickly and quite succintly. Taking custody of a family member is already tough but add a little romance to the equation? Keith and Lisa were both realistic and down to earth. Serious topics were covered but I think handled in a real world way, which I appreciated. Life's tough and Laurie handled it perfectly. A sweet romance that was utterly adorable, and p.s. I loooved the title. So appropriate!

Laurie will be awarding promo items to random commenters at every stop, and the choice of a basic Nook or Kindle to one randomly drawn commenter during the tour (US/CANADA ONLY).