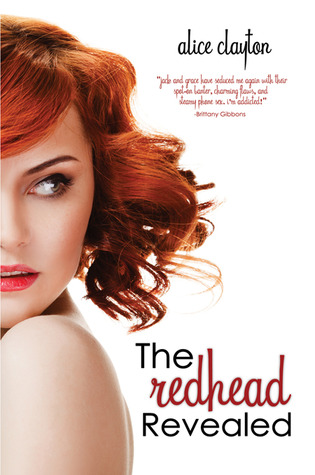 The Redhead Revealed
By: Alice Clayton

As their careers catch fire, Grace and Jack -- everyone’s favorite foul-mouthed, funny, and feisty couple -- find themselves on opposite coasts. Grace has landed in New York City, where she loves being onstage again, particularly because she’s playing a fabulous character in a musical written by her old college flame, Michael. Their rekindled friendship makes exploring the city that much more fun.

Wait, it’s just friendship, right?
Meanwhile, in L.A., Jack can scarcely keep up with the swirling throngs of women who track him everywhere he goes, the endless press appearances, and the ridiculous rules his manager, Holly, keeps concocting for him -- all part of the buildup to the release of Time, his steamy new film.

Thank goodness for phone sex.
But even when their schedules allow them to connect, Grace and Jack must keep their relationship off the radar and away from paparazzi cameras. Sure, the sex is sensational, but can this duo survive swirling rumors, the demands of their chosen professions, Grace’s raging internal battles, and a whopping nine-year age difference?

Tick-tock, the clock is ticking. Isn’t it?
Alice Clayton brings the second installment of a tale told with her magical mix of humor and heat, so cuddle up under the sheets and flip on the Golden Girls. Grace and Jack are at it again.

My Thoughts
Grace and Jack are back!! After reading The Unidentified Redhead, I immediately ran over to BN.com and downloaded The Redhead Revealed. I just couldn’t get enough of Grace and how much did I love Jack? With a wide open ending and a romance just starting cross country, I was dying to find out what happened.
The novel starts out with Grace in New York acting in a play and Jack still in Los Angeles getting ready to promote his movie. The bulk of the novel deals with the long distance relationship. When Grace had left to go to New York, the couple had only been together a few weeks. So we really see Grace and Jack out of their element, trying to be a couple even with the sometimes insurmountable obstacles in their way.
I know it doesn’t sound like a novel length synopsis, but the book is really rich in character development and its previous awesomeness. Grace is insecure about the age difference between her and Jack but it doesn’t seem to bother Jack at all. Jack is dealing with his new found stardom and finds himself uncomfortable with all of the attention. I loved how we watched each character grow and change with the differences in their lives and their relationship.

“So if you think for a second I’m going to let you end this without giving me a legitimate reason, you are truly crazier than I thought. I’m in this thing with you, a willing participant, and you can’t decide for both of us. Not anymore.”

Filled with funny situations, heart wrenching disappointments, and soul soaring achievements, I loved it from page one. Grace and Jack were some of my favorite characters ever and I can’t tell you how sad I was when I finished and realized I wouldn’t read about them anymore. Alice Clayton has a wonderful way of writing that can make you smile, laugh out loud and within a couple of pages an have you sniffling. Excellence throughout, I’m hoping for another sequel, so cross your fingers!