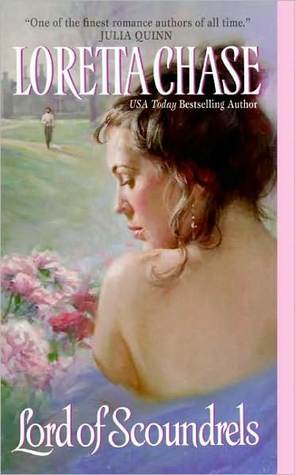 Lord of Scoundrels
By: Loretta Chase

DETERMINED LADY
Tough-minded Jessica Trent's sole intention is to free her nitwit brother from the destructive influence of Sebastian Ballister, the notorious Marquess of Dain. She never expects to desire the arrogant, amoral cad. And when Dain's reciprocal passion places them in a scandalously compromising, and public, position, Jessica is left with no choice but to seek satisfaction ...


LORD OF SCOUNDRELS
Damn the minx for tempting him, kissing him ... and then forcing him to salvage her reputation! Lord Dain can't wait to put the infuriating bluestocking in her place --- and in some amorous position, And if that means marriage, so be it! --- though Sebastian is less than certain he can continue to remain aloof ... and steel his heart to the sensuous, headstrong lady's considerable charms


My Thoughts
Jessica Trent is in Paris for the season with her wily grandmother and her idiot brother in tow. In an effort to curb her dumb brothers antics, she approaches Sebastian Ballister, in an effort to cut down on drinking and partying involving her brother and his cohorts. Initially intrigued by this small woman expecting him to listen to her, its no time at all until Sebastian falls completely under her spell.
Consistently on the best of lists almost 20 years after publication is quite a feat but a well deserved one at that. This is hands down one of my favorite books to read, EVER! With witty dialogue, fantastically fleshed out characters, and a well rounded story with plenty of sexy times, Lord of Scoundrels is what others books can only hope to be.
Many reviews have been written about how fantastic this book is, so I will refrain. I will however share some of my favorite quotes to influence you to run to your local library or bookstore to read this book today, if not in the next twenty minutes. Oh and by the way, you are welcome! :)

“Jessica, you are a pain in the arse, do you know that? If I were not so immensely fond of you, I should throw you out the window."She wrapped her arms about his waist and laid her head against his chest. "Not merely 'fond,' but 'immensely fond.' Oh Dain, I do believe I shall swoon.""Not now," he said crossly. "I haven't time to pick you up.”

“We've been wed more than a month. Since it appears you mean to stay, I might as well give you leave to call me by my christian name. It is preferable, at any rate, to 'clodpole.”


“Women don't have a sense of humor. They don't need one. The Almighty made them as a permanent joke on men. From which one may logically deduce tha the Almighty is a female.”